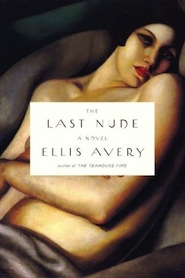 Historical fiction is, essentially, literary fan fiction. It’s the literary part that gives it more cred than “Friday Night Lights” superfans hanging out on a bulletin board dreamily considering what if Julie Taylor came out of the bathroom wrapped in a towel, her lips flushed and red, her skin dewy, and found Tim Riggins, primed, and sweating Red Stripe from his pores into her duvet. But at it’s core it is still fan fiction, with a high percentage of words spelled correctly and void of emoticons and poorly-written sex scenes.

With The Last Nude Ellis Avery considers the subject of 1920s art deco artist Tamara De Lempicka’s six-painting Rafaela series. The portraits star a heavy-lidded woman with soft rounds of flesh, all red scarves and lipsticks and shading. She was one of many women De Lempicka painted and, of course, with whom the artist got all deep sighs and panty. The novel is about their blip of a relationship set in the edgy, ex-pat heavy, Jazz Era in Paris and features cameos from some the eras major players including Violette Morris, a female boxer turned Nazi informer, and Sylvia Beach of Shakespeare & Company, publishers of Ulysses.

Rafaela is an American girl who is en route to Italy for an arranged marriage when she jumps ship with a creeper to forge a life for herself in Paris instead. She is intrigued by a Coco Chanel dress she saw once and resorts to doling out sexual favors in exchange for a new life. She goes a bit wild-child, dancing on tables and diddling married men with her roommate Gin. De Lempicka finds the girl in a seedy prostitute hangout park. Rafaela is looking for a friend; De Lempicka is looking for a model. At first Rafaela is a substitute for a similarly shaped model, a commission who has left town. But De Lempicka moves on to Rafaela as a subject and the work knocks the socks off art patrons.

The story, told mostly from Rafaela’s perspective, is gripping-ish. Lots of lounging and grape eating, followed by messing up the sheets. After spending sexual energy as almost a job or a way of staying afloat, Rafaela finds someone she enjoys screwing and falls hard for the artist, 10 years her senior. Unfortunately, artists. De Lempicka might be walking the walk of love, but she is looking out for numero uno and pitting patron versus patron, with Rafaela as a pawn. The last fourth of the book shifts voices in a way that feels like staying a bit too long at the party. The now aged artist considers her past and has her say on what it all meant.

What worked in Woody Allen’s movie “Midnight in Paris” — monologues by Hemingway, glimpses of Salvador Dali — comes across as hokey and distracting. Rafaela’s new found friend, and eventual savior, is a character named Anson. He’s a sportswriter turned go-fer for a private investigator. He is shades of Hemingway. He is dissing F. Scott Fitzgerald and fending off Rafaela’s advances with a vague medical situation caused in the war. A wife and a girlfriend. It’s all kind of blerg. Paula McLain did it better with her account of Hadley Richardson in the novel The Paris Wife.

On the other hand, The Last Nude is a good way to dig into the work of De Lempicka and inspires the same artistic curiosity as Steve Martin’s novel An Object of Beauty. It’s always fun to consider Paris in the 1920s, when the world seemed on its way to being a better, more accepting and artistic place. That alone makes this a worthwhile read.