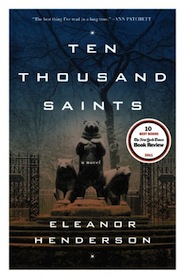 Eleanor Henderson’s novel Ten Thousand Saints starts with a condensed version of the one-crazy-night premise from which entire films are built.

It’s a lazy New Year’s Eve day of smoking, huffing, drinking, and snorting for Teddy and Jude. The inseparable teen-aged besties are skateboarders with next to no social currency. Teddy’s mom has skipped town and he’s probably been lied to that his dad is dead. Jude was adopted and lives with his hippie mom, who is a glassblower, and his kind of bitchy barely-younger sister. His adoptive father ditched out years ago and lives in New York City, where he is hot and heavy with a former ballerina who has a cocaine-curious high-school aged daughter, Eliza. Eliza is planning her first visit to the boys’ small Vermont town to meet the not-quite step brother.

The trio ends up at a party where Jude’s mouth gets him in trouble with some older kids. While he’s getting bound and urine-stained, Teddy is in the bathroom having his first go-round with both Coke and sex. Later that night he will take a few puffs off something poisonous, following Jude’s lead, and die. Meanwhile, somewhere in Eliza’s lady parts, sperm meets egg.

This book is … okay-ish. It’s a lot of back and forth — from Vermont to New York and back to Vermont and then New York. Travel always seems so unnecessary in novels, just something to do to characters to throw them into a new situation. Plus there are some weird turns. Jude learns he might have Fetal Alcohol Syndrome — though it doesn’t play into anything. The band goes on a half-assed tour. Teddy’s older brother takes up the issue of New York City’s proposed curfew. And in the first pages of the book it’s super hard to tell the two boys apart and keep their somewhat similar-somewhat different back stories apart. I don’t know. I’d watch this movie on a lazy Saturday afternoon and it wouldn’t result in self-loathing over the wasted day. But mostly it was just okay.