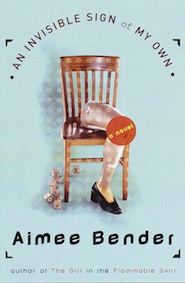 There was a span of time in the early to mid-aughts where I would buy every man I was romantically interested in a copy of An Invisible Sign of My Own by Aimee Bender. I probably hold the record for buying the most copies of this book. I could probably write a memoir called Books I Used to Unsuccessfully Woo Men in My Life. There must have been something about this compulsive book giving. Some sign of my own I was trying to show the men I wanted to love me, but I have no idea what it was.

Maybe it’s just that I really love this strange, quirky novel and I thought men who could appreciate it would be worthy? Who knows. The real question is, would An Invisible Sign of My Own hold up to further scrutiny, a re-reading nearly a decade after I first read it?

The answer is a resounding YES. I re-read Bender’s debut novel as part of my re-evaluation of personal artifacts project, and it really does hold up.

The story? Mona Gray is a twenty-year-old whose beloved dad was struck by a mystery illness that may or may not be real when she was ten. Dad’s sickness puts the fear of death into Mona and turns her into a serial quitter and knocker on wood. She quits everything she loves: piano, running, sex. She knocks on wood whenever she gets anxious, sometimes spending hours knocking until her knuckles bleed.

Mona’s kind of humdrumming it through life when she’s asked to become the math teacher to a group of second graders. Here Mona discovers she’s kind of good at teaching math but in an unusual way. She introduces the children to Numbers and Materials, where they find numbers out in the world. One girl brings in an IV tube from her near-death mother’s hospital room as a zero. Another kid brings in his dad’s severed arm as a seven.

Meanwhile Mona’s developing a thing for the new science and health teacher who intermittently intrigues and infuriates her. It’s good.

Oh and then there’s the mysterious neighbor who used to be Mona’s math teacher but instead goes into the hardware business. Mr. Jones is a wearer of necklaces. These necklaces are made of wax numbers and denote the day he’s having. An eight is not so great, a twenty is pretty damn good. Mona is, of course, obsessed with Mr. Jones and his numbering system, even though she’s kind of pissed at him for not taking any notice when her dad fell ill.

Okay, this probably sounds like entirely more quirk than one novel can sustain, but it’s not. In fact, in Bender’s sure hands it all rings emotionally honest and genuine. There isn’t a single point in the book where Mona’s tics seem forced or like some sort of affectation adopted for the sake of being unique. Instead, this is Mona’s reality and the novel follows her trying to figure it all out — her fear of death and her overwhelming anxiety and her need for love and companionship.

It’s such a beautiful book and I’m so glad that it has held up to a re-reading. I’m also pretty glad to keep on my list of most beloved personal pop cultural artifacts.