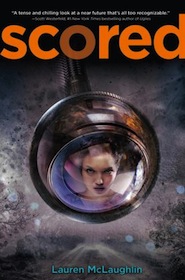 It’s pretty clear that my current obsession is dystopian fiction, but I recently stopped reading a handful of young adult dystopian novels. How could I read a book where love needs to be cured? Because, apparently, everything bad in our society (hate, war, etc.) is caused by love, so love is enemy number one. Please. Or a world where the dictator is a teenager? Come on. I know it’s young adult fiction so teenagers are the main characters, but in dystopian fiction I have to believe, at least a little bit, that our society could turn into the world you’re building.

But thankfully Scored by Lauren McLaughlin passed my test. I could see parents and administrators thinking that scoring teenagers, both their grades and their behaviors, to keep them in line would be a good thing. It’s SATs on crack.

In Lauren McLaughlin’s world, teenagers are under constant surveillance. Electronic “eyes,” little circular devices that are hung from ceilings, polls, wires, and trees, are placed all around the community, including in schools, parks, and businesses. These eyes follow the teenagers and everything they do affects their scores, and every month their scores are reevaluated with 100 being the highest they can receive.

High school senior Imani LeMonde has been in the 90s for awhile now, which means if she can keep her high score she will have a full ride for college, and she has to get a full ride because she is far from rich. But Imani’s world starts to crumble when her best friend, a girl in her 60s, starts having a relationship with an unscored.

There are unscored teenagers, the ones whose families rebelled against the scoring, but hanging out with them is devastating. Even though Imani wasn’t hanging out with one, since her friend was, it reflects on her. She falls from a 90 to a 60.

Imani fully believes in the score and thinks it can better society, but not everyone agrees. Imani’s history teacher, who has tenure, is constantly questioning the scores, and so is an unscored rich guy in the same class. It’s not hard to tell that Imani’s score being dropped, and the influences around her, start making her ask questions about the scores. It also doesn’t hurt that the rich unscored guy in her class is pretty cute.

This was a really good story. It’s not too far fetched an idea that students start being put under surveillance, and it’s really easy to expect that people would rebel against such an idea. It’s also not too far fetched that many scored students would go along with the idea of shunning those who do not have a score as high as they do. Don’t we already, on some level, do this in our own lives? Is it so hard to imagine that if it were mandated that we wouldn’t fall in line?

So I could buy into the idea. I don’t think everything about it is fabulous, but I could buy into it. I could also buy into Imani and the interaction she has with the rich, unscored kid. They question each other, she gets mad at him for acting superior, they both start questioning what they believe, and along the way they start to have some feelings. It’s a futuristic Tony and Maria, minus the singing and dancing.

Scored was a good, quick read and it was believable enough for me get lost in the world McLaughlin built, and it made me appreciative of not having been scored as a teen. No way would I have been in the 90s. Drinking beer does not a 90 make.