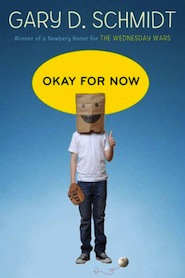 Doug Swieteck has an abusive father, passive mother, a jerk for an older brother, and he and his family just moved to stupid Marysville, New York, where the library is only open on Saturdays and everyone assumes Doug is as much of a troublemaker as his brother. Things aren’t so great for poor Doug. That is until he meets a fiery girl name Lil and Mr. Powell, an awesome librarian.

But they did become friends, and library buddies, which is where they met Mr. Powell. Doug didn’t like Mr. Powell right away either. Why would he like someone who kept trying to get him to draw the birds from John James Audubon’s bird book? Doug told him over and over that he doesn’t draw. Only chumps draw, of course. But when Doug and Lil kept going back to the library and some paper and pencils were just lying there next to the Audubon book, he might as well try, right?

I can’t even begin to tell you how charmed I was by Okay for Now by Gary D. Schmidt. A companion to Schmidt’s award-winning The Wednesday Wars, which I haven’t read, Okay for Now stands on its own as a charming, sometimes heartbreaking, story told by Doug, a Yankees fan growing up in the late 1960s.

Doug does have a hard life, and he reminds us again and again that things never go right just when you’re starting to feel good. He actually speaks to the reader to tell us this, and when characters speak to readers, I usually love it if done correctly. This is done beautifully. He speaks to the reader when something important happens that we should’ve noticed, like:

The statements and questions directed at the reader are perfect. They make the whole thing feel like Doug is sitting right next to me, telling a story.

And it doesn’t hurt that Doug is an extremely strong, well-written character. When he felt happy, I was smiling, and when someone teased him or his dad let him down again, I felt like I was kicked in the gutt. I just loved this. I loved it so damn much.

Hearing that a story involved an abusive father, Audubon bird panels, someone returning from the Vietnam War, and Jane Eyre, all told from the perspective of a young, poor kid living in the 1960s, I probably would’ve cringed. How could it all work together? But it did. Gary D. Schmidt has beautifully woven all of these things into a compelling, charming tale. I love Doug, Lil, and Mr. Powell, and I could feel the good and bad times with them. This is a really wonderful book.