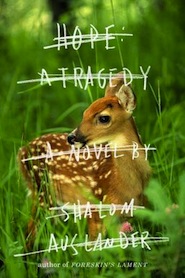 Shalom Auslander is not for the faint of heart or easily offended. His writing is angry, bitter, hilarious, some might even call it blasphemous. It will make you squirm. It’s uncomfortable and itchy and may induce squirming, which is what makes it so fantastic.

If you’re not familiar with Auslander’s short story collection Beware of God or his memoir Foreskin’s Lament, I feel a little sorry for you. You’re missing out. You can remedy that immediately by reading Auslander’s Largehearted Boy Book Notes essay for his latest novel Hope: A Tragedy. If you can hang with that essay you might be the kind of reader who can handle Auslander’s longer work.

In his first novel, Auslander presents us with hapless, wanting to he hopeless, Solomon Kugel. He’s just moved his family to an old farmhouse in bucolic Stockton, NY. Searching for a clean slate, a fresh start for his sickly son and his wife, Solomon doesn’t quite get the peaceful bliss he’s after. First, they can’t afford the damn house.

Second, he brought his mother with him. His mother is no picnic. She’s allegedly on the verge of death and yet manages to tend her garden every day. A garden that Solomon fills with store-bought fruits and vegetables to make his mother feel better. She never catches on. Also, ol’ ma passes herself off as a Holocaust survivor even though she grew up in the United States and is entirely too young to have actually been alive during WWII.

Finally, there’s an awful, funky smell permeating the house. Oh, and a serial arsonist torching all the farmhouses in the area.

One night Kugel is sleepless in bed next to his wife when he hears a tap tap tapping, but not on his chamber door. This ominous noise seems to be coming from the attic. He gets up and goes in search of the source and in the attic he discovers an old, grotesque, disfigured woman claiming to be Anne Frank pecking away at a laptop. After he finds Anne in the attic he makes a crack to himself about how he was really hoping for shit. Shit wouldn’t have been the ideal thing to find in the attic.

Anyway, Solomon’s stunned at the discovery and not entirely sure he buys the old woman’s story. At the same time, he’s not sure he can discredit her either. He worries about being the Jew who evicts Anne Frank from his attic. Who could do that? That is, of course, if he could even get anyone else to believe that Anne Frank is living in his attic.

And Anne? Anne isn’t the doe-eyed innocent we read about in her diary. She’s an old, angry,e bitter woman who is none too pleased with being the face of the Holocaust. She’s a writer struggling to follow-up her well-read diary.nShe has a lot to say about suffering and guilt and entitlement as a gentile reading it, it made me squirm. In fact, a lot of the book is kind of squirmy. It’s a thinker and strikes a lot of blows against things we hold as hallowed, mostly the guilt we have about those who have suffered.

This book treads in the absurd but never in the way that makes you shrug it off as unbelievable bullshit. In fact as Solomon’s life spirals out of control, I believed every stupid thing he did, every bad decision he made was true to his character. Afterall, Solomon’s the guy who was raised by a woman who pointed to a lampshade and said, there, that’s your grandfather. Or handed him a bar of soap and said, this, this is your aunt. Solomon’s the kind of guy who carries around a little notebook so he can jot down potential last words. He’s fascinated with the final words people speak before they die.

I liked Hope: A Tragedy a lot. It feels wrong to say that I liked it so much, which is kind of the point. In fact, I enjoyed this novel so much that it infected my subconscious and at night my brain produced entire spinoffs of the book involving an Anti-Guilt Association filled with angry protestors who would picket outside of people’s houses who felt guilty for things they needn’t feel guilty about.