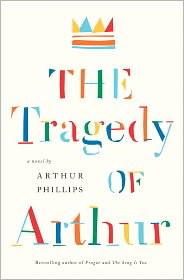 Just like many pop culture nerds, I too like to impose arbitrary rules on any list I make. I think it imbibes the list with some significance, importance, or something else that lists of crap don’t have naturally. For this year’s list of Favorite Reads, I gave myself two rules. One, I couldn’t include books I’ve read before (The Giant’s House and An Invisible Sign of My Own). It’s just not fair to the books of 2011 to compare them to my all-time favorites.

Second, I decided not to include books by my friends. But I will say that I loved reading The Mostly True Story of Jack by Kelly Barnhill, Brooklyn, Burning by Steve Brezenoff, and The Tanglewood Terror by Kurtis Scaletta. I loved them not just because I know the authors but because they are smart, entertaining beautiful novels that people of any age would enjoy. You wouldn’t go wrong by reading any (or all) of these books.

So with those two arbitrary rules in place, I present to you the ten books I enjoyed reading the most this year (in no particular order) not all of which were published this year.

The Tragedy of Arthur by Arthur Phillips: I’m not even a Shakespeare person and yet this novel about the discovery of a long-lost Shakespeare play was totally captivating and fun and, as weird as it is to say, educational. I learned a lot about Shakespeare and the theories that revolve around his famous plays. Lest you think that sounds kinda snoozy, it’s not at all. In fact, it’s super engaging and keeps you turning pages to see what’s going to happen next. Plus, most of the book takes place in Minnesota and I love that kind of stuff. [review]

The Wilder Life by Wendy McClure: It was a banner year for non-fiction as far as my reading list is concerned. I hardly ever read non-fiction and this year, I’ll have three on the list. First is Wendy McClure’s memoir about her search for the “lost world of Little House on the Prairie.” But the book is about more than that, it’s about grieving a lost mother, a lost childhood, and accepting the fact that yes, indeed, things change when we grow up. Also, a ton of Little House trivia, and what I loved the most is that McClure tries to reconcile her modern-day sensibilities with some of the seamier sides of the Ingalls. Such a good book. [review]

Please Ignore Vera Dietz by A.S. King: This young adult novel has all the great things I look to in literature: humor, sadness, smart female characters, and beauty. Vera Dietz’s story about the death of her friend Charlie and how he haunts her is at times funny and heartbreaking. But perhaps what I loved the most about ‘Vera Dietz’ is that A.S. King so brilliant illustrates Vera’s “deal” with great writing and wonderful scenes without ever saying, “hey this is Vera’s problem.” So much love for this one. [review]

Stories I Only Tell My Friends by Rob Lowe: If you had told me 368 days ago that I’d be including a book by Rob Lowe on my favorites of the year list, I’d have given you a withering, condescending stare along with a snooty sniff and probably said something kind of assholey about not reading celebrity memoirs or not digging non-fiction. Well, here I am, and her’s Rob Lowe’s memoir on my list. I will offer one caveat, had I not listened to this book on audio read by Rob Lowe it might not make this list. But listening to Lowe tell his story complete with dead-on impersonations of the entire Brat Pack and a bunch of other celebrities captured my heart, just like Ponyboy Curtis did the first time I read the words “When I stepped out into the bright sunlight from the darkness of the movie house, I had only two things on my mind: Paul Newman and a ride home.” [review]

Just Kids by Patti Smith: Two celebrity memoirs in a row? Yeah. I guess I’m just that kind of hypocrite. But come one, Smith’s at least won a National Book Award so I got that kind of cred to fall back on, right? Actually it doesn’t matter because I loved this memoir of Smith’s life with photographer Robert Mapplethorpe and I generally don’t love NBA-winning books. This book is steeped in misty-pink magic that will make you long to be really poor in the fairytale New York of the 70s that was filled with rich, famous people just aching to be your friend. Also, it will make you care a lot about a desk. [review]

Ready Player One by Ernest Cline: Like Christa so wonderfully depicted in her review, the 80s worshipped in Cline’s sci-fi-y paean to video games is not the 80s I grew up in, and yet I loved spending time in Cline’s 80s. Well, it’s not really the 80s. It’s really 2044 and the world spends all it’s time in the video game called the Oasis and their a search for the keys to a huge fortune. The book is the most fun you’ll have reading. Seriously. [review]

Orientation and Other Stories by Daniel Orozco: I’m fond of making really asinine proclamations along the lines of “Everyone should just quit writing about Vietnam because Tim O’Brien already wrote ‘The Things They Carried’.” It’s fun you should try it sometime. Anyway, after reading Orozco’s hotly-anticipated short story collection, I proclaimed that everyone should stop writing about office life in corporate America now, he’s done it. I stand by that assertion because Orozco seems to bring the humanity to the drab greyness of corporate life that so many other authors forget about. This is a great, great collection of stories. [review]

Blueprints for Building Better Girls by Elissa Schapell: This is a book filled with really great stories about really real women at different stages of their lives. All the stories are good. I want to emphasize that before I say the very last story, which is about the same character as the very first story, is so fucking good it’s worth the price of the book alone. For real. [review]

Swamplandia! by Karen Russell: This novel about an odd family in the swamps of Florida owes a lot of George Saunders (think about the stories “CivilWarland in Bad Decline” or “Sea Oak”) and Katherine Dunn (think Geek Love). Lucky for me I love Saunders and Dunn, and I really enjoyed Swamplandia! This is one those books where the journey is the reward because the ending kind of stinks. Still, totally read-worthy. [review]

The Family Fang by Kevin Wilson: This book about a strange family of performance artists surprised be at every turn. It never went where I thought it would go and I loved that. I would say more but I’m really tired of writing this list. [review]