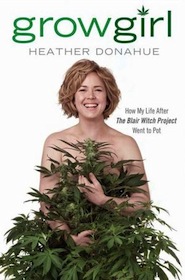 The last time you saw Heather Donahue she had a camera pointed up her nostrils, flared and leaking, and she was delivering her “Goodbye cruel world!” speech in one of the final scenes of “The Blair Witch Project.”

In the decade plus since that movie she has had a few roles here and there — nothing she wants to brag about — but most notably spent time in northern California growing weed. Her memoir Growgirl: How My Life After ‘The Blair Witch Project’ Went to Pot is a years-worth of planting, trimming, romantic frustrations, starting a band, and living in the hippie-dippy community of fellow growers who unflinchingly use the word “Goddess” in casual convos.

For a reader whose only background with the weed-growing industry is limited to how cute Mary Louise Parker is with her flippy skirts and empty Starbucks cup, Donahue’s actual details of planting, tending, encouraging, cloning, killing mites, and trimming are a little bit like white noise. But the rest of it, oh lo the rest of it, is a good old fashioned laugh riot.

Donahue is at a getaway retreat, fresh from burning the keepsakes of a long relationship, when she meets Judah, falls for him, and then ultimately moves to Nuggettown where he is a grower. She’s enough into this sudden love to leave Los Angeles, but wary enough of relationships to eschew the patterns set by the women who have come before her: Fall in love, move in, raise grow boy’s child part time while maintaining a friendly relationship with grow boy’s ex and anyone new she brings to the table, never get married, prepare to be replaced.

Donahue does it on her terms. She sets up her own shop at the end of a long road. She starts her own little farm including a garden with traditional foods like tomatoes and kale, chickens and a puppy. Meanwhile she’s taken on some small time weed growing inside the house and in the garage as well as a small patch in the garden. She’s not going to be Judah’s “Grow Wife,” the term for the women whose version of feminism involves the ultimate in home cooked domestication. She’s going to be a Grow Girl, pretty much independent, save for the pot tutors who help her with newbie grower issues. Wise move. Things with Judah last about five more minutes, an ending she telegraphs when he pops a bone dog while admiring her naked friend during hot tub time. (People are frequently naked and frequently in hot tubs in Nuggettown).

Donahue might not have been able to convince directors she was more than an improv artist in the post-Blair Witch job hunt. But she is so funny, self-deprecating, and likable — even when your stomach sinks and you think “Oh no, Heather. Don’t do that. Please don’t do that. Oh, Heather. You did that” — and it all makes for fun writing and storytelling. Consider an early scene, when she meets up with Judah at the hot springs.

And so it goes. A year’s worth of versions of that, pitted with new life blisters and the paranoia of breaking a federal law. Totally entertaining.