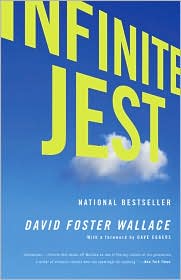 Either the past year in books didn’t have the same crash-bang-pow as 2010 or else I just did a meh job of finding the new and the hot to stain with my saliva. I figured out pretty early on that this list would never have the purity of being a list of just books published in the past year.

My reading style changed a bit since the last time I made this list. In 2011 I was more willing to go off-roading with my lit, picking up books willy-nilly and taking them for a spin or tackling massive hunks that I’d overlooked. I also had like four or five books I read all but the final 75 pages of, which was kind of weird of me because I really like finishing books. (This includes “Swann’s Way” and “Electric Kool-Ade Acid Test,” so now I’ll never be able to check off either when I’m taking some sort of “How Awesomely Well-Read Are You” Facebook survey).

Infinite Jest by David Foster Wallace: The tale of the Incandenza family is an epic one that requires the kind of commitment that, if you put the brain waves, page-turning power toward rocket science instead, you would be sipping a Pina Colada on Mars as we speak. It’s a must-read for Gen X and people who want to be a part of a super-secret club of the insufferables who have read it. And, it’s fantastic and mind-numbing and hilarious and satisfying. [review]

The Broom of the System by David Foster Wallace: On the other hand, this novel is like Infinite Jest-lite. It has so much of what makes IJ great, the characters and the humor and the mayhem, without the footnotes and math. The one is the quirky story of Lenore Beadsman, bird-owner, Converse-wearing woman whose boss Rick Vigorous is in love with her. Chaos ensues. [review]

Sophie’s Choice by William Styron: This pretty autobiographical book is about a young writer who moves to Brooklyn to create the Great American Novel and becomes the third wheel in the shitshow that is the relationship between the moody Nathan and Sophie, a woman with a tragic past who doles out pieces of her life to Stingo in half-truths and lies before finally just socking it all to him super hard and right in guts. Big love. [review]

Fun Home by Alison Bechdel: Alison Bechdel’s graphic memoir blew my mind. It’s about growing up in a funeral home, a father who maybe kills himself soon after finding out that Bechdel is a lesbian, and she comes to learn a few things about his bad behavior when he was alive. It transcends its genre and is a great story in addition to being a great memoir with pictures. [review]

We Need to Talk About Kevin by Lionel Shriver: Ker-pow! This is the story of a woman’s relationship with her son both before and after he kills a bunch of his classmates. It’s a complicated mess of events and includes some very heart-wrenching and honest feelings she has for this child she never really connected with or understood. [review]

It Chooses You by Miranda July: This probably seems like a long shot. It’s a memoir-ish and slightly journalistic side project Miranda July started working on while she was hiding from her actual project, writing the movie “The Future.” In it, she meets and interviews a handful of Californians who are selling blow dryers, leather jackets and other items in the Penny Saver. In the meantime, her writing is really funny, smart, quote-worthy and relate-able and it inspired all sorts of big love for Miranda July. [review]

1Q84 by Haruki Murakami: Haruki Murakami’s latest novel is a hefty slab of text about an assassin and a math teacher slash author, a ghostwritten bestseller, tiny men who crawl out of the mouths of animals and make something called an “air chrysalis.” It’s hokey, it’s lovely, it’s long, it’s very Murakami. [review]

The Art of Fielding by Chad Harbach: This novel is about a super great short stop who gets a last-chance opportunity to play collegiate-level baseball. Unfortunately, he hits a wicked slump that really monkeys with his mind. Meanwhile, there is a great cast of characters orbiting his world, including the president of the college, his gay roommate, a solar-system sized forced who is his teammate and, of course, a girl. [review]

The Marriage Plot by Jeffrey Eugenides: Jeffrey Eugenides’ novel has a great trio of smart characters in his novel about a love triangle, depression and mania. Maddie is in love with the hulking Leonard and Mitchell distracts himself from loving Maddie by chasing his religious beliefs around the world. It’s a great story. [review]

Honorable mention: My Sister’s Continent by Gina Frangello, Midnight in the Garden of Good and Evil by John Berendt, An Object of Beauty by Steve Martin, The Paris Wife by Paula McLain, Gryphon by Charles Baxter, Lola, California by Edie Meidav.

Worst book of 2011: Paying for It by Chester Brown. This graphic memoir is about how Brown decided to forego relationships in favor of staying single and occasionally fulfilling his sexual urges with prostitutes. I think it just had one too many pictures of a post-coital Brown, his wormy unit shriveling on the sheets.