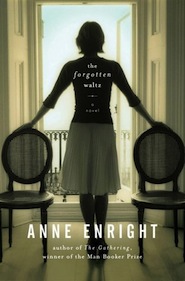 There are two ways to read Anne Enright’s novel The Forgotten Waltz: The first, as a sexy page-turner filled with feigned nonchalance between instances of passionate hotel room hopping; The second, as one woman walking into the middle of life-as-she-knows-it with dynamite stuffed into her Wonder Bra.

The premise is that Gina Moynihan is going to meet up with young Evie, the daughter of her lover. Along the way she considers the events of the past few years that have brought her to this point, starting with the first time she saw Sean Vallely standing by a fence at a party. Him: her sister’s neighbor, middle-aged, married to an unspectacular woman with a daughter who is quietly rumored to have something wrong with her. Gina: fresh from a trip to Australia with the boyfriend who will become her husband, hiding deep in the yard because her niece and nephew have never seen someone smoke a cigarette. It’s an insignificant moment at the time, but one that Gina will revisit and paint with poetry once things ramp up between the two a few years later.

Before that, though, there is a one-night stand. Gina and Sean end up at the same out-of-town conference, ringleaders of a crew of party people who move seamlessly from all-business to after bar. It’s a poorly conceived drunk idea, last two standing, that lands them in bed playing bumbley fumbley. Then they ignore each other. Gina comes to loathe him — but it’s not a real loathing, and it feels a lot like watching a babysitter in a horror movie take a flashlight into the basement to check out a noise. It’s the kind of loathing that, instead of fading to ambivalence morphs to lust. Of course it happens again. He’s been brought in to her company as a consultant, which can only mean it’s a matter of time before one stands too close to the other or her shirt drops a notch and they’re busting loose toward a hotel near the airport.

The truth is, Sean’s kind of a creep, though not in an obvious way. A real charmer. Has he done this before? Definitely. It’s in the gifts he gives her: perfume, a scarf. Generic tokens. Once with a 22-year-old, although once while dining they encounter a power suit bulldog who seems to have a curious familiarity with him too. Does his wife know? She would say no, but the truth is probably more layered. She might just be choosing not to know. That shrapnel from Gina’s life? Good guy. Maybe a little too into the whole online scene.

It’s a juicy little story, it is, but it tugs at the eye roller and the inner “Aw, grow up already. Figure it out.” Eyes covered, begging Gina “DO NOT GO INTO THE BASEMENT!” A lot of books end and you assume that is how it ends. Not so much “And they lived happily ever after” as “I’m satisfied where you people are right now in your lives, and I trust if I checked back in ten years you would still be doing just fine.”

Not so much with this one. This one gets even messier when the book closes.