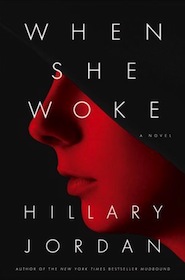 Hilary Jordan’s novel When She Woke is a modern day mashup of The Scarlet Letter and The Handmaid’s Tale. In this futuristic United States abortion has been banned because some weird STD called The Scourge has left many women sterile and the birthrate around the world has plummeted. Apparently in the future we’ll have solved the problem of over-population so well that a nearly non-existent birthrate will be a huge cause for concern. Or maybe it’s just the platform super-conservative Christians were looking for to spread their anti-woman agenda. It’s never clearly addressed, but if you just go with it you’ll enjoy the book much more.

It opens with Hannah Payne waking in a Chrome ward, a shiny white and steel cube. She’s clad in only a paper gown, her actions are broadcast to viewers around the world, and her skin has been genetically modified to appear bright red. This chroming, as it’s called, is the punishment the government doles out to lawbreakers. The colors vary based on your crime, some people are yellow, some purple, and murderers are red.

Hannah was convicted and found guilty of murder. Her crime? Aborting her fetus. She’s given extra Chrome time because she refused to name the father, a super popular married preacher, Reverend Aidan Dale, and the person who performed her abortion.

The government is not messing around with this Chroming stuff and the author does a great job explaining it. Whenever the book spent time discussing Chroming, Chromes (those who have been Chromed), and their treatment in society I was in love with this book. I, the hater of details, wanted to know more and more and more about this terrifying United States and their new-fangled draconian laws.

So the concept and the structure supporting the story are top notch, where it kind of falls apart is, well, Hannah’s story.

Hannah’s a twenty-six-year-old seamstress who has an affair with the Reverend Aidan Dale, stays silent because she thinks she’s in love and sacrifices everything to keep their secret safe. Hannah comes from a super conservative religious family where women do what they’re told, honor and obey their parents, and generally exist without any minds of their own. I think Jordan uses this as a crutch for Hannah’s naivety and gullibility. As a reader, I’m not sure if I buy it, especially because by the end of the book Hannah’s gone through a huge change and it doesn’t feel as though she’s earned the wisdom she extolls.

Anyway, after Hannah’s let out of the Chrome ward her parents send her to a sort of religious repatriation camp, full of all kinds of wicked stereotypes you’ve come to expect from those sorts of situations — the soul-matey buddy, the weak-minded child, the cold, cruel mistress, the ass-kissing tattletale. Nothing surprising really happens here until Hannah decides to step off the path in defense of her soul-matey buddy, Kayla.

From there the two women start a weird, underground railroad sort of adventure filled with nefarious men and militant women. There’s danger everywhere, and it all feels a little bit predictable complete with wholly unnecessary lesbian sex scene, and at times ridiculously melodramatic.

And even with all those complaints, I’d still say this novel falls on the better side of okay. Read it for the very interesting take on what a post-Roe v. Wade America might look like. It’s chilling. Don’t read it for Hannah’s personal insights and growth because those seem to appear out of thin air and not because she earned them.