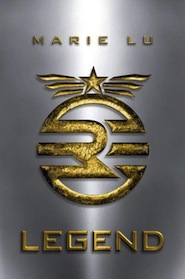 I’ve listened to the buzz surrounding Marie Lu’s debut young adult novel Legend all year. It just came out at the end of November, but long before it came out the rights were sold for a movie. It’s also been called the new Hunger Games, which I love just a little too much. I think on a weekly basis I recommend the Hunger Games trilogy to someone and I have been obsessively tweeting about the upcoming “Hunger Games” movie ever since the casting.

Legend isn’t as good as The Hunger Games, but it was still a good, fast-paced read that I finished in a matter of hours.

Set in the distant future in Los Angeles, the United States isn’t the United States anymore. It’s now split between the western states, the Republic, and the eastern part of the country, the Colonies, and they are at war. We don’t get a good picture of the Colonies in this first book since the majority of the action takes place in and around Los Angeles.

The story is told in alternating chapters by Day and June (with Day’s chapters in an annoying, unnecessary mustard yellow). June is fifteen and a military prodigy of the Republic after having gotten a perfect score on her Trials, the tests all ten year olds take that determines their future career paths. Those that score high go through military training at prestigious schools and June is just about to graduate. June is loyal to the Republic and her older brother, a military man who raised her ever since her parents died when she was young.

Day is fifteen and an outcast living on the streets in the slums surrounding Los Angeles. He’s been hiding ever since he failed his Trials and ran away from the so-called labor camps where those who fail are sent. He has made it his mission to cause problems for the Republic, so he’s stolen from their banks, messed with their machinery, and stolen food and medicine for others in the slums.

Day and June collide when June’s brother dies after trying to thwart Day’s latest attempt to steal medicine. June goes undercover to try to track down and capture Day.

A lot of what happens in Legend isn’t too surprising. Of course June meets up with Day and they struggle with understanding each other while they uncover the wrongdoings of their government. This is typically the formula for these types of novels, though, so that didn’t bother me.

What did bother me, and why it’s not as good as The Hunger Games, is that, while the pacing of action is good, some of the characters seem to discover things or change their minds way too easily. Being told that they are enemies for fifteen years of their lives, you’d think it would take a little bit more for them to start listening to each other. It all just happens too quickly for me. I would’ve loved to see some more character development and internal struggles, but the action just moves too fast for that here.

But don’t get me wrong, I liked this book. I will be reading the sequels and it’s a book I can recommend to people. I just won’t start calling it the next coming of The Hunger Games because it’s not quite there.