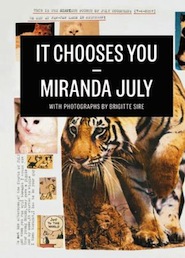 Then I loved Miranda July. It was her movie “Me You and Everyone We Know,” which she wrote and starred in. It was different. Nice. A little uncomfortable. Mostly different, with clever characters whose motivations I didn’t understand, made better for the not understanding. There was minutia, and I’m really into minutia lately. It was funny, but not obviously funny. It was an hour and a half I didn’t regret at all. And now. And now.

Miranda July tipped me over with It Chooses You, the memoir slash journalistic exercise she wrote while she was supposed to be doing something else, namely the screenplay for another movie. It’s a familiar moment she describes, and the reason why my boyfriend and I — both in the middle of other creative projects — first started a basement rock band, then started a web comic (although neither lasted long).

“The funny thing about my procrastination was that I was almost done with the screenplay. I was like that person who had fought dragons and lost limbs and crawled through swamps and now, finally, the castle was visible. I could see tiny children waving flags on the balcony; all I had to do was walk across a field to get to them. But all of a sudden I was very, very sleepy. And the children couldn’t believe their eyes as I folded down to my knees and fell to the ground face-first with my eyes open.”

July starts contacting people who are selling things in the Penny Saver: a suitcase, a leather jacket, cats, a blowdryer. She doesn’t want their stuff, she wants to meet them and talk about stuff. She takes along a photographer, Brigitte Sire, who has her work included in this book and July’s assistant Alfred “… to protect us from rape.” She trades about $50 for a session with these people and asks them about their lives and when they were the happiest. She meets a mid-transition transsexual (selling a leather coat) and a teenager selling bullfrog tadpoles and at a house where a woman is selling a blowdryer, the woman’s daughter sings for them “The Climb” by Miley Cyrus.

And somewhere in Los Angeles, July meets Joe, an old man who has spent years writing dirty poems for his wife. Lots of “tits-and-twats” stuff. He inspires a direction shift in July’s script and then role in her movie “The Future.”

I’m not sure where a person in the book business shelves this. At our local bookstore it was with films/movies/TV. But I’d give it more of a memoir, memoir-y, memoir-ish label. She has a very favorite-blogger voice, funny and a collector of stories, circumstances and non-event events. Just kind of honest sounding. Maybe I’d even stick this book somewhere near Bird by Bird, the quintessential “How to Write Good” guide by Anne Lamott. Especially when it comes to the short personal bursts, writing “The Future” or doing anything creative, actually. She talks about her style when it comes to creating films, being grateful that she is a part of it, but:

“I was desperately trying to remind myself that there was no one way to make a good movie; I could actually write anything or cast anyone. I could cast ghosts or shadows, or a pineapple or the shadow of a pineapple.”

Just pages later she has left a copy of her script untouched. She’s trying to become unfamiliar with her main characters. She imagined it curing like ham, the longer she left it. She also tries to trick herself. She’s a snoopy housekeeper who has stumbled upon this packet of words:

“‘What have we here,’ I said to myself, peeking at the first page and then slyly glancing over my shoulder.”