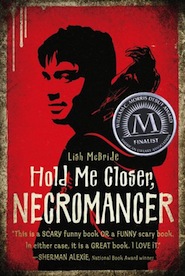 Necromancy: the ability to communicate with and raise the dead.

Sam LaCroix had no idea what necromancy was or that he had this power. Living a boring, fast-food-employee life, Sam could barely make rent, had no girlfriend and no motivation or drive to change anything. He was sarcastically apathetic about his humdrum life.

But when Sam accidentally damages the car of Douglas, a rich, powerful necromancer, everything changes. So begins Sam’s adventure into a world of necromancy, magic, werewolves, and secrets from his past.

I loved Lish McBride’s Hold Me Closer, Necromancer for many reasons. First, it’s a great adventure. Douglas tells Sam what necromancy is and he offers to train him. He gives Sam one week to think about his proposal, so Sam tries contacting his mother, father, and other quirky characters to learn about his power. But Sam doesn’t answer Douglas fast enough, because Douglas ends up kidnapping Sam long before the week is over. In the cage he’s held in, Sam meets a beautiful werewolf and starts learning more about this new world and the power struggles within it. He also meets a smartass harbinger (a being at service to necromancers), easily the best character in the whole book.

Second, because of the harbinger and so many others, this novel is funny. Quite often in these types of novels there may be one character around for some laughs, but overall it’s about the magic or the adventure. Here, almost all of the characters are funny. Sam and his fast food co-workers are hilarious, especially the co-worker whose head is raised from the dead. My favorite character is the harbinger, Ashley. Even in the most dire of situations she is a snarky brat. I love her.

Third, every chapter title is a song lyric or title that describes the chapter. I loved trying to guess what might happen in the chapter based upon the song, though I really don’t know why the songs are there. It’s not like Sam is in a band or is a big music enthusiast. Maybe I missed something, but I don’t really care. For me the songs were fun.

I could probably continue the list of things I liked, but those few things sum it up pretty well. It’s an adventure that made me laugh. What’s more fun than that?