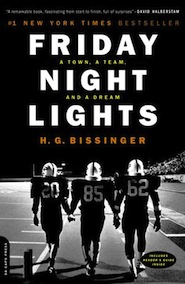 I bawled my eyes out for the entirety of the “Friday Night Lights” television series finale (and, to be honest, several preceding episodes), so I had been looking forward to reading the book by the same name. Written by H.G. Bissinger, it inspired the movie, which in turn prompted a television series. I’m generally a book-over-movie-over-show person, as many of you probably are, so my expectations were even higher than usual.

As I began reading Friday Night Lights, I was struck with disappointment as I realized the dissimilarity between the TV show and the book. However, after letting go of the missing characters and some time for reflection, I began to truly appreciate Bissinger’s work for what it is: a stunning work of journalism, capturing a year of intense emotion in an enlightening case study of the football team in a small town in Texas. Bissinger spent a year following the players on the Permian Panthers, investigating the politics and drama that it inspired.

The book primarily flows through a series of vignettes about individual players. For each young man, Bissinger relates his life at home, at school, and on the field. Though they were times difficult to keep straight, I honestly found myself caring for and cheering for each one, from a boy who becomes violently ill before each game to one who cheats his way through school to one who carries the weight of his uncle’s unrealized football dreams. Through the eyes of an outsider, Bissinger is able to portray the players as people—as kids—instead of the mammoth, heroic figures they have become to the citizens of the town.

As you can perhaps tell already, there is much more than football in this football book. It examines the town in detail, too, to the extent that it drew vitriolic criticism when it was published. At times, adults and professionals do look foolish as they paint their faces and defend breaking rules to support the team they love; however, the portrayal seems ultimately fair, thorough, and sympathetic. Even so, it is at times hard to take. In particular, the examination of race and education, including a harsh racial divide and a lawsuit over a student’s algebra grade, are remarkable and illuminating. I will say that I enjoy football, and I still skimmed some of the tedious play-by-plays to learn which team emerged victorious. It was well worth it for the substance between the games—and so fascinating to think that for many of the book’s subjects, the games were the primary substance.

There are moments when the book’s events, having occurred in 1988, seem antiquated. Some of the disparities and realities, perhaps unrecognized at the time of publication, are now every day topics. What startled me was the number of times that I forgot the age of the book. Its discussion of difficult economic times, social inequities, the school achievement gap, and teenage drama seemed all too familiar and relevant. I did not find the TV show’s beautifully developed relationships in the book version of Friday Night Lights, but the stories of the players and the problems of the town are more than enough to provoke thought and to give me something to feel like crying about.