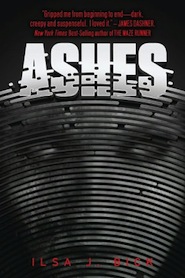 Alex is a teenager camping in Wisconsin on a mission to spread her parents’ ashes. Just as she runs across a girl and her grandfather, an electromagnetic pulse zaps the planet, killing the grandfather instantly and causing Alex and the girl, Ellie, to fall to the ground in pain. Both survive and try hiking to a ranger station for answers, but along the way they witness some teenagers eating an older woman. There are some really descriptive passages of them pulling out her eyeballs and eating them like spaghetti and meatballs.

Alex and Ellie eventually add one more person to their crew, Tom, a military man who was camping with friends who either didn’t survive or were turned into zombies like the eyeball-eating teenagers. The first half of the book is about how this new-found family tries to survive by staying in the wilderness, away from the cities where more zombies may be. Eventually they know they have to leave, and this is when the book shifts from surviving a zombie apocalypse to surviving a religious cult.

The second half finds Alex, Tom, and Ellie torn apart and Alex seeking help from a religious, Warren Jeffs-like cult of survivors. The zombies haven’t gone away, but Alex, thinking she has found some solace, soon finds herself questioning all of their rules and anti-female regulations. What’s worse: being out in the wilderness on your own against zombies or being in a small town of Bible-quoting, Jesus-loving men who require young women to have guides wherever they go and who match up mates?

I liked a lot of different things about Ashes. It is a really great, fast-paced thriller that gave me anxiety because the potential for horror was always nearby, whether from zombies or cults. I never felt secure or safe and I never trusted anyone. I sympathized for Alex and wondered what decisions I would make were I in her position.

Both parts of the book do feel different, but I like the change of focus. I liked the examination of society in the second half. People would turn to their faith and look for leaders in a time of tragedy, but would they go as far as these leaders? Maybe.

While I did really like the book, some of the stupidity of characters annoyed me. Ellie is only eight years old, but she reminds me again why I do not want children. She is whiny and cranky and in almost every sticky situation she does something completely idiotic to ruin it. I suppose I should have more sympathy for her since she’s only eight, but I don’t.

The stupidity with Ellie is one thing, but at times I also wanted to shake Alex because the answer was right in front of her face. She is a really smart character, but she over analyzes everything and it seemed like she should’ve figured things out way sooner.

I really did like the book, though. I can get past some character stupidity. If they hadn’t done some stupid things it probably wouldn’t have been as challenging for them and as exciting for me. This is the first in a planned trilogy, and it ends in cliffhanger that I saw coming, but I have no idea where it’s going to go from here, so I can’t wait for the next one.