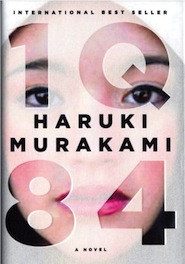 The first thing you need to know about Haruki Murakami’s hefty slab of a novel 1Q84 is that it sizzles. Seriously. Pick it up off the display at your local bookstore. It’s like 5 pounds and it’s wrapped in this higher-test version of cloudy tissue paper and there must be an electric power source, a fork in an outlet, something, coursing through this thing. At the very least, magnets. Touch it. You’ll see.

The story centers on Aomame, a sleek and level-headed assassin slash physical trainer, whose world shifts a little to the left after she climbs down a super-secret ladder during a traffic jam on an expressway. She’s late for a date involving a sharp weapon, an abusive businessman, and a discrete spot on the back of his neck.

The cab driver who alerts her to this exit warns her that if she takes this route off the expressway, not to be surprised if the world changes. Sure enough, she starts noticing subtle differences right away and begins referring to the year formerly known as 1984 as 1Q84. When Aomame isn’t stealthily killing bad men or tweaking people’s muscles into sweaty submission she likes to dress in her one remotely sexy outfit and get nuts with anonymous balding men in hotel rooms. Occasionally this involves a tag-team effort with her new friend, a bi-sexual female cop.

At the same time Tengo is a solid writer whose work lacks that certain something. His all-knowing editor comes to him with a proposition: He has discovered a 17-year-old girl with a great story, “Air Chrysalis.” Fuka-Eri just needs someone solid to re-write it and she has the potential to become a bestselling sensation — as long as no one outside the inner circle ever finds out the truth about the ghost re-write. This solitary math teacher by day, writer by night reluctantly takes the job. The book becomes a hit, but it unleashes a hoard of mysterious troll-sized critters with a pretty serious religious affiliation.

The second thing you should know is that 1Q84 has that signature Murakami-ness to it that makes it feel like he is this wordy puppeteer who blurs the landscape into something dreamy so everything feels like you’re still awake, but not awake enough to know that, I don’t know, your second grade teacher wearing a Superman costume? Or in this case, the world doesn’t have two moons. It feels enough like Wind-Up Bird Chronicle for a reader to know that these two books have the same birth father.

It goes without saying when it comes to Murakami that there are plenty of places in this book to shelve your disbelief. The difference between him and other writers is that you don’t slam the book shut and say: REALLY, HARUKI?! These Shrinky Dink beings just crawled out of a dead goat’s mouth? Or REALLY, HARUKI? You’re going to convince me that this hulking, immobile pedophile is a misunderstood conduit of religious truth and that part of this sacredness involves his . . . boner? It only seems whack when you say it aloud.

You should also know that sometimes reading Murakami’s sex scenes feels a little clinical, but clinical in this way that is like your homeroom teacher saying the word “genitalia” multiple times in a really long drawn out way.

This book is long. It’s divided into three sections and the first two slide by seamlessly, but the third is an alright-already-old-man, get-on-with-it that includes some nonessential subplots, repetition, and some almost-coincidences that are a frustration because of all the actual coincidences we’ve signed on for. It’s a little sitcom-y in the style of: one character walks into a bar looking for a character who has just left through the back door, times, like, 100. At the same time, it never settles into a boring sputter, so. Anyway, fun read.