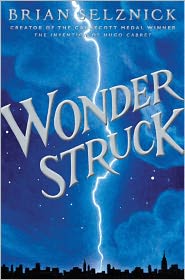 Wonderstruck is the follow-up to Brian Selznick's Caldecott Medal-winning The Invention of Hugo Cabaret. This novel is truly a work of art. It alternates between two stories, one told with words, the other told with pictures. The two stories unfold in a delightful series of parallels and discoveries. It would be tragic to spoil any of these for you — suffice it to say that I gasped and smiled with each new page.

I don't know much about what makes a technically sound drawing, but I do know that the pictures in Wonderstruck evoke a powerful emotional response. They are generally clear and quite simple-with the exception of some delightful, whimsical details-but convey deep, human messages that even a novice graphic novel reader can understand. By interchanging the pictures with words, Selznick demands all of the reader's attention, and I was only too happy to give it to him. The real genius for me was Selznick's incorporation of deaf characters. This elevates the medium of a graphic novel, as the reader, like the characters, does not always have words to help them communicate. Selznick turns this into a gift, not a limitation, imbuing his characters and pictures with poignancy, significance, and grace.

Much of the joy of reading this novel comes through the deft interplay of innocence and experience. Written for younger readers, Wonderstruck builds on an ostensibly simple story, adding layers with academic explorations, complex settings, and adult themes. The characters struggle through issues of death, loneliness, friendship, loyalty, disability, and survival. By the end of the book, the different story strands tie together beautifully. I would warn more cynical readers that Wonderstruck does have a sentimentality verging on too sweet, but I found that the clever twists, practical characters, and serious obstacles made it more than palatable.

In one nod to the romantic, Ben, one of the main characters, collects meaningful items and keeps them in a special box. Early in the story, he is introduced to a more formal version of this: Cabinets of Wonders, pieces of furniture used to store similar memorabilia. Ben reads a description of these cabinets:

“The viewer was indeed supposed to feel a kind of ‘wonder’ and awe. . . If you've ever stood beneath the skeleton of a dinosaur, or gazed at a giant diamond, or come upon something beautiful in nature. . . you know this feeling of wonder (109).”

By this definition, Wonderstruck itself is a cabinet, leaving the viewer full of wonder and awe.