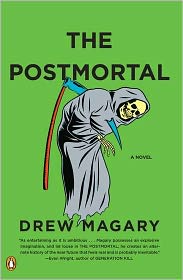 We spend a lot of time and money trying to extend our lives and the effects of aging: health care, fitness clubs, anti-aging creme, botox, etc. You name it; we do it. Just look at the wax figurines on the “Real Housewives of Beverly Hills.”

But what if we didn't have to worry about aging? What if there was a cure? That's the premise in Drew Magary's The Postmortal.

The Postmortal begins at the end with the text files of John Farrell, a man who recorded the story of his life during the cure, being found in a government facility. The date is 2093 and the reader is told that the following book highlights what was found in Farrell's journal and showcases why the cure should never again be given. The book then jumps to the journal and 2019, the year the cure was found.

The cure really does end aging, but at the beginning it was outlawed by the government, though that didn't stop the black market cures. That's how Farrell, a jackass 29-year-old, gets his cure. Farrell describes in detail the way the cure is given, the national protests to allow it, and the anti-cure rebels.

The rest of the journal outlines when the cure was finally approved by the government and its effect on the world. Since we’re told at the beginning that the cure should never be given again, it’s clear that things don’t go well, but there are some funny moments. Married men everywhere start applying for divorce. It turns out death do us part doesn’t seem like such a good idea when they could potentially live hundreds or thousands of years.

This book had great potential. The premise was interesting and the way society reacted to an aging cure seemed plausible. What made me not love this book was the lead character. I can't stand John Farrell. He's portrayed as the kind of guy who would wax his chest, swoon over Megan Fox, drive a really douchey sports car, and read Maxim. I had these thoughts before I read the author bio, and the author actually writes for Maxim. Note to self: read author bios first.

What's sad is that John Farrell has interesting family members and I wish we could've gotten more perspectives from them. His dad, still mourning the loss of his wife, gets the cure and almost immediately regrets it because it will keep him from her longer. He starts taking on every bad habit you can think of to give himself a disease so he can die. That would've been a much more interesting character to follow, but sadly we only see his dad from time to time through conversations Farrell has with him.

The Postmortal isn't bad; it's just not great. If you like Steff from “Pretty in Pink,” this book is for you. If you're more a Ducky person, steer clear.