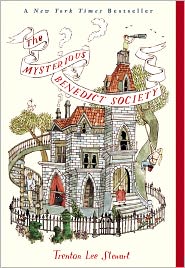 Reynie is an orphan with a gift for puzzles. Kate always carries a bucket full of gadgets that help her MacGyver any hairy situation. Sticky is probably the smartest kid on the planet. Constance is just plain stubborn. Together they are the Mysterious Benedict Society.

But let’s backtrack. These kids didn’t know each other at the beginning of Trenton Lee Stewart’s The Mysterious Benedict Society, but they were all intrigued by a newspaper ad about a special test for “gifted children looking for special opportunities.” The series of tests they took were clouded in mystery, including what would happen at the end of the tests. That’s where they met Mr. Benedict.

As an adult reading this novel designed for middle school children, I was leery of Mr. Benedict. He doesn’t completely fill the children in about the tests or what he exactly wants them to do. He also doesn’t let them contact anyone. Reynie, the main character in this novel, desperately wants to contact his pseudo-mom from the orphanage, but Mr. Benedict tells him that he has contacted her and all is well. Reynie just believes him and accepts the fact that he can’t contact her. I wanted to shake him and tell him to question authority.

Luckily Mr. Benedict wasn’t lying, but he’s so shrouded in mystery that I wouldn’t have gotten past the first test. No way am I doing anything without knowing why.

After the tests the students are offered the opportunity to become undercover agents in a school for gifted children where Mr. Benedict believes the president of the school is trying to take over the world. Again this is shrouded in mystery and everything they’ll need to do isn’t exactly spelled out for them, but all of them agree to do it even though they’re told it could be dangerous.

The adult in me should probably stop being so cynical, but why would they do this?

The four kids are then enrolled in the school, which is on its own remote island, and they try to obtain the president’s secrets while still trying to obey all the crazy rules and regulations enforced by older students.

Yes, I was cynical about this story, but it really is cute and kids would have fun reading it because the four children are just so interesting. Reynie is a master at solving puzzles, solving most of them way before me, and Sticky is just way too smart for his own good. Kate and her bucket crack me up because she literally carries a bucket around to hold her stuff. One would think a backpack would work better, but Kate knows that buckets can also come in handy. Constance is the kid you want to give back because she is just so stubborn and whiny, but there is a reason for this that isn’t revealed until the end. Together they make an interesting group and made me smile throughout the story.

The story itself isn’t as entertaining as the kids, so I don’t know if I’ll continue reading any of the other Benedict Society books, but I’m not mad I read this. It was cute and I love the kids. I just don’t love them enough to keep reading.