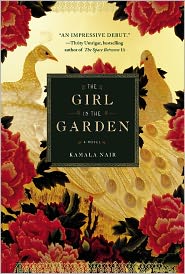 Yet, as the novel progressed, I forgot all that. The Girl in the Garden flashes back to tell Rakhee's story from age ten. Born of Indian parents and raised in Minnesota, she feels like an alien among “most of the other kids at Plainfield Elementary with their blue eyes, hardy frames, and Lutheran church whose vaulted ceiling soared above their golden heads every Sunday morning.” Her father is a well-known cardiologist at the Plainfield (think Mayo) Clinic. Her mother tends to both a beautiful garden and her family, but becomes increasingly emotionally disturbed for reasons that are unclear to Rakhee. Eventually, her mother uproots her from Minnesota and takes her to visit her family in India, where she feels equally alien and out of place.

There, she meets her relatives for the first time, people who have a pile of family secrets as high as the Taj Mahal. A lush jungle lies beyond the house but the family forbids her to go there which, of course, makes it irresistibly appealing. The story unfolds at a rapid pace as Rakhee visits a mysterious walled garden in the jungle and begins to unravel the tangle of family secrets.

Like her heroine, Nair spent much of her youth in Minnesota where her father is a physician at the Mayo Clinic. I met her at a book launch party in the Twin Cities. Her whole family was there, too, and her mother brought along fabulous Indian food. (In contrast to the family of the novel, they seem like a happy and supportive group.) Nair has made her own journeys to India in search of her cultural heritage. We discussed the fact that she works with some of the same themes in The Girl in the Garden as Pulitzer prize-winning author Jhumpa Lahiri covers in works such as The Namesake. Both writers explore the difficulties of people who are strangers in a strange land, trying to find a bridge between Indian and American cultures. Yet, as Nair pointed out, The Girl in the Garden, focuses on an American trying to fit into the Indian culture, while The Namesake primarily portrays the life of a young Indian man trying to find his place in America.

While Nair artfully describes the lush beauty of India and the complexities of bridging two cultures, it's ultimately the story line that makes The Girl in the Garden a success. Occasionally at the limits of credibility, a tiny bit over dramatic at points, it is nonetheless a well-woven story and too gripping to put down.

Writer, editor, reader, traveler. Not necessarily in that order.