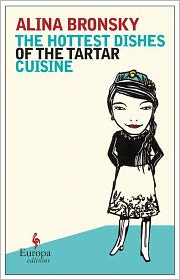 When Rosalinda Achmetowna’s frumpy, stupid and ill-mannered daughter Sulfia gets knocked up, she can’t help but believe that it didn’t happen the traditional way. Who would sleep with Sulfia? No, it must be as Sulfia claims: Something that happened in a dream. Rosa sets out to fix it, using an arsenal of home abortion techniques and finally finds success the old fashioned way — with a knitting needle.

This seems to work, judging from the bloody sheets, but months later Sulfia still seems to be pregnant and the almost-medical professional neighbor who performed the procedure offers her explanation: Sulfia was obviously pregnant with twins, but they had only paid to rid her body of one of the fetuses. Shrug.

A baby girl is born, Aminat, a real beauty with her dark Tartar looks, and Rosa is smitten with her. She sets out to shape this little girl into something lovely and cultured, well-dressed and smart. Like her grandmother and unlike her mother.

The Hottest Dishes of the Tartar Cuisine is a wicked little dark-humored novel by Alina Bronsky starring a Tartar family in 1970s Russia. Rosa is a witch of a woman, a strong arm demanding that things be her way. Her husband is passive against her demands, her daughter is terrified of her to the point of moving across town and taking young Aminat with her. It’s a minor hiccup for Rosa, who finds a way to get her daughter diagnosed as mentally ill and regain possession of the little girl. And so goes a power struggle, and custody battle ripe with manipulation techniques.

The quick read covers 30 years of their life, with hints to what is going on politically. The action is set around Sulfia who marries first a good looking man who meets Rosa’s approval, but has a hankering for other women. When he succumbs to that craving, Rosa steps in to raise Aminat while Sulfia is bedridden with depression. Sulfia gets pregnant again, and Rosa pulls some strings to parlay this into a proposal. When that husband decides the family should emigrate to Israel, Rosa pulls a gruesome move that results in Sulfia and Aminat staying with her, while Sulfia’s baby Lena makes the move. Then Rosa sets the stage for the big save: Sulfia must find a foreign husband who can move them out of Russia to a place with a stable economy. A place where sugar isn’t rationed and train stations don’t explode. This requires a sacrifice that is completely unforgivable.

This story, translated from German by Tim Mohr, is secondary to the well-played characterization of Rosa. As they say, in all good there is a little bit of evil and in all evil there is a little bit of good. While she is, at her core, a self-righteous, Type A, braggy, manipulative and mean demon, sweet moments — although veiled in contempt — come into play, specifically when she nurses her daughter back to health and interupts Aminat’s spiral toward juvenile delinquency after Sulfia’s first husband leaves. And even though the other decisions she makes for her daughter aren’t necessarily what Sulfia would want for herself, Rosa does what she believes she needs to do to give her daughter a better life. Rosa moves between evil and not-so evil seamlessly and none of it ever feels false to her character. It’s only when she dangles Aminat in front of a German pedophile, luring him into a marriage with Sulfia and a new life for the ladies in Germany, that she stops earning sympathy from the reader — not to mention from Aminat.

This novel is definitely unique and has a big voice and has an interesting and complex character in Rosa.