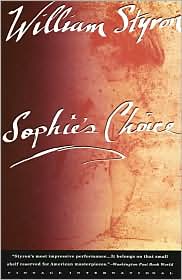 In August I read an essay by Alexandra Styron that partly recounted the first time she tried to read her father's most famous work. Sophie's Choice?by William Styron was still in galley form, and I suppose, symbolically, so was she. Alexandra made it about as far as the narrator's erotic dream before she worried about barfing on her loafers. Then, despite the hullabaloo that surrounded the movie and the fact that she, herself, became a writer, she didn't double back until she was in her 30s and curious about the man she remembers as less hands on and more Great Male Artist.

In reading it, she meets young Stingo, the young writer her father was when he first moved to Brooklyn in the 1940s.

“The experience was, well, death-defying. Thrilling and nausea-inducing ? and I communed with my father in the full bloom of youth. Not Stingo, but Daddy, so vivid and living so close I felt I could turn around and touch him back through the years.”

And that's how a writer I'd never heard of sold me on reading a book I'd only heard of.

Sophie's Choice stars Stingo, a reluctant virgin who has moved from Manhattan to Brooklyn with plans to write his debut novel. His first two experiences with his upstairs neighbors include a domestic bloodletting and a wicked ceiling shaker of a sex scene. He meets Sophie, a Polish immigrant with a tell-tale tattoo from time spent in a concentration camp — though she is not Jewish, and Nathan, who is. Nathan is also a commanding presence, smart and dramatic. Stingo falls in love with the former and craves affirmations from the latter. They become a friends-forever threesome, hanging out at the bar, traveling to Coney Island — when things are good. But Nathan is prone to sudden bursts of paranoid fury that always end in snot and tears. And when he darts out into the night, hurling insults and vowing its over between all of them, Stingo and Sophie nurse each other and talk about her chilling background.

Huge chunks of the book flash back to Auschwitz, where Sophie and her children are taken when she is discovered illegally carrying meat. She describes the sights, sounds, starvation, and smells — and the survival tactics that haunt her. Then Nathan will cool down, return to the scene, and everything is like Paris in the 20s all over again.

The characters are so complete, between the balance of likability and flaw. Stingo is naive and a people-pleaser, guilty about his Southern upbringing. So resentful of his virginity that he goes from Mr. Nice Guy to a Chaffed Loin Jerk every time he feels like he has paid his dues at first base and is ready to take a lady to a grand slam land. Sophie is sad and the more she talks, the more Stingo realizes she has actually told him less. She has a bare bones version of the truth. Then there is the truth. Then there is the whole, whole truth. The one that plagues her (and has become a metaphor for people who must choose between two impossible things). Nathan is just crazy. From day to day he might stir his friends into a frothy lather of happiness, or whip them into shells of their former selves, stripping them of any sense of self worth.

In one of my favorite parts of Alexandra Styron's essay, she writes about answering the phone at her childhood home and taking messages from a series of accented women from around the country, each claiming to be Sophie.