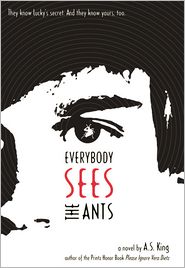 It’s ironic that a book about bullying can be so full of cruel, negative stereotypes that it verges on bullying itself.

Lucky Linderman, the teenage protagonist of A.S. King’s young adult novel Everybody Sees the Ants, has been routinely bullied by an asshole named Nader McMillan since he was seven years old. Nader’s antics grow ever more cruel until, one day at the pool, he uses Lucky’s face to try to erase the cement.

With a giant wound in the shape of Ohio on his cheek, Lucky’s mom packs them up and heads to Arizona to the safe confines of her brother and sister-in-law. They leave behind Lucky’s father a chef who can only cope with his falling apart family by disappearing into work.

Once they land in Arizona things aren’t too ducky either. Aunt Jodi is convinced Lucky’s suicidally-depressed which he and his mom say is ludicrous even though Lucky got into quite a bit of trouble over a school project that involved asking his classmates how they’d commit suicide if they wanted to die.

Lucky, the son of two escapists (his mom swims compulsively claiming she’s part squid and his dad to the restaurant), escapes into his dreams where he’s on a mission to find his POW/MIA grandfather, Harry. He believes this is his life’s mission, because his grandmother mentioned it on her deathbed. Through these dreams which have weird endings, Lucky is trying to work out the crap in his life.

The book is engaging, Lucky’s a smart kid who is struggling with some real issues and A.S. King is an excellent writer. That cannot be argued. I’d have probably loved this book if it weren’t for the awful, offensive treatment of Aunt Jodi.

See Aunt Jodi is fat, and Lucky tells us this right off. Fat Aunt Jodi then proceeds to (and I’m not exaggerating, she’s described using these exact words) flop, plop, glop, slop, and waddle all over the narrative. She eats too much processed, high-calorie food, she finishes other people’s meals, she talks with her mouth full, and food flies from her gaping maw landing on other people. At one point when someone tells Aunt Jodi that if she ate less and exercised more she would lose weight, and she acts as though this is brand new information she’s never heard before even though it’s made abundantly clear that Aunt Jodi spends a lot of time reading celebrity tabloids which, if you’ve ever seen one, are filled with hot Hollywood diet secrets of the stars.

Are you kidding me?

I’m not entirely sure what Aunt Jodi’s weight problems have to do with Lucky’s story. Are they there to show that Lucky, though the bullied victim, can be an asshole too? Or is she supposed to be an unlikeable character that shows how magnanimous Lucky is when he takes pity on her and starts to cook real food?

It’s unclear to me. What I do know is that if the stereotypes heaped on Aunt Jodi were of a racial or LGBTQ nature, readers would be outraged and there’d be many a hand-wringing blog post about the offensiveness. But since Aunt Jodi is fat, and it’s still okay to bully and berate fat people, it’s all okey-dokey. This is a damn shame because fat kids are so often the victims of all kinds of bullying and instead of finding solace and strength in Lucky’s story they will only be shamed and shown that even as adults the bullying never ends.