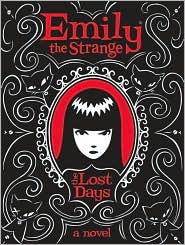 I have a roller coaster relationship with graphic novels. I'm on a high after Craig Thompson's Blankets, a low with The Library Wars series, back on top with Vera Brosgol's Anya's Ghost, and in the gutter with The Walking Dead series. I know I shouldn't group all graphic novels together, but when I read a bad one I tend to avoid them all for months.

I tried reading a couple of the Emily the Strange graphic novels, but I was never hooked. I didn't hate the smartass, gothy, science geek, but the novels are full of great artwork and not much text. I want more text, more dialogue. Is that wrong of me when it comes to graphic novels? I should probably rethink my approach.

Because I wasn't the biggest fan of the graphic novels, I also stayed away from the Emily the Strange novels by Rob Reger and Jessica Gruner. I shouldn't have. I just finished Emily the Strange: The Lost Days and I can easily say that I love the cheeky, intelligent, social outcast Emily.

Lost Days begins with Emily waking up on a park bench not knowing where or who she is. She only knows a few things, like that she's human, a girl, she speaks English, and likes the number 13. Emily is the queen of list-making and her lists are always 13 numbers long.

Emily tries uncovering clues about her past and present in the town of Blackrock, a small town currently visited by a mysterious medicine show. She starts living behind a rundown restaurant called El Dungeon and she befriends El Dungeon employees, customers, and numerous black cats.

But when it comes to Emily “befriends” is a strong word. Emily is not a people person. She much prefers the company of cats and often hides and spies on others from afar, until she starts realizing she needs their help.

Slowly, Emily starts piecing together the odd things she finds in Blackrock, like that she looks similar to Blackrock's founder and that she has a brain for the scientific and can quickly and easily build anything, including a sandstorm. Yes, sandstorm. She's talented.

With a flair for the scientific and strange, Lost Days is a great introduction to Emily. And in true Emily style, here are my favorite 13 things about her from The Lost Days:

1. She's smart.
2. And a smartass.
3. She draws pictures inside her journal.
4. She takes Polaroids and throws them in her journal, too.
5. She gives everyone nicknames whether they like them or not.
6. She's good with a slingshot.
7. She got a $123 ticket for unlicensed slingshot use.
8. She says things like “Farking bumwarks!” and “Doublebricking gobfarx!”
9. She can't remember the name for a baby cat and even wonders if it's called a pickle.
10. She uses the name Earwig when she doesn't know her own.
11. She created her own Magic 8-Ball.
12. Science is her thing and she makes amazing, out-of-this-world inventions.
13. Emily is just cool.

She would hate that I called her cool, though. She'd probably say, “Ewwww!”

But she is cool and I stick by it. She's smart and funny and this novel, comprised only of her journal entries, is great. It may make me appreciate the graphic novels in the long run, but for now I'm going to stick to the novels. Onto the next – Emily the Strange: Stranger and Stranger.