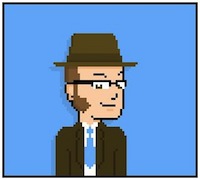 Over the past few weeks, we’ve been featuring cartoonists who will are exhibiting at the Minneapolis Indie Xpo, an independent comic book festival which starts TODAY at The Soap Factory. This event is free and open to the public on today and tomorrow (November 5 and 6) from 10am-5pm. MIX features web cartoonists, self-published cartoonists, boutique publishers, and large publishing houses. Learn more about MIX exhibitors and programs.

Evan Pedersen is the owner and Pants Commander of FancyPantsGangsters.com, a Minneapolis based netcast network. He is cohost of The Well Fed Guide To Life, a restaurant review show, as well as Yet Another Gaming Show, which is about videogames. He is a notorious overtalker and overthinker, both of which will likely get him killed one day.

What book(s) are you currently reading?
Just finished some steampunk western mind-candy called Dead Iron and a book about rare spirits (the drinky kind, not the spooky kind) called Boozehound. I’m also picking away at Kavalier & Clay as well as Who Censored Roger Rabbit, the terribly written book that inspired “Who Framed Roger Rabbit.”

Have you ever had a crush on a fictional character? Who?
Aside from my fictional persona (who am I kidding, I hate him too), the closest I’ve come to a crush is Rose Red from “Fables” or maybe Tananda from the “Myth” books by Robert Asprin. I’d probably go gay for Zaphod Beeblebrox, honestly.

If your favorite author came to Minnesota, who would it be and what bar would you take him/her to?
Most of my favorite authors are dead, so Donnie Dirk’s Zombie Bar would be a good stop, I’m sure. Most of the living ones (like Gaiman and Moorcock) seem to be of a gothly persuasion, so probably Perkins. Goths love omelets.

What was your first favorite book?
First favorite books were probably the “Grey Star” series of books. They were like Choose Your Own Adventures with dice rolling and character sheets and such. The main series was Lone Wolf, but I guess I was a hipster back then, going for the more obscure title.

Let’s say Fahrenheit 451 comes to life, which book would you become in order to save it from annihilation?
The Hitchhiker’s Guide to the Galaxy. Not only is it one of the few examples of sci-fi humor done really well, but I still think there is more said about human nature in those 5-ish books than most dramas and philosophical wankings ever do.

What is one book you haven’t read but want to read before you die?
I need to read more political fiction, like Orwell and Huxley. I’m a politics junkie, but it seems like so many people misinterpret things like Animal Farm that I kind of want to know why they are wrong, instead of just feeling that they are.