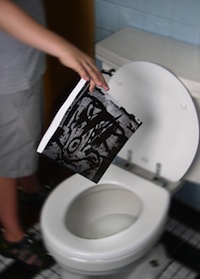 When not watching Law & Order re-runs, Dale Flattum spends his time creating posters, books, art forgeries, and other screen printed propaganda under the alias: TOOTH. Before this, he pursued a career in music, touring the world for over nine years with the noisy San Francisco rock bands; Steel Pole Bath Tub, Tumor Circus, and Milk Cult. At MIX he will be selling his new book: TOOTH – The Graphic Art of Dale Flattum.

What book(s) are you currently reading?
I’m re-reading a book of interviews with David Lynch, and trying to avoid finishing Kavalier and Clay.

Have you ever had a crush on a fictional character? Who?
Were Josie and the Pussycats fictional?

If your favorite author came to Minnesota, who would it be and what bar would you take him/her to?
Well if J.D. Salinger stopped by, I’d suggest we just hang out in the backyard. But if Luc Sante came over, I’d suggest we go drink coffee under a bridge or something.

What was your first favorite book?
Stuart Little maybe? I remember being obsessed with that drawing of him in his canoe. We also had a set of four Walt Disney books that I stared at a lot. Especially the drawing of the car wreck from 101 Dalmations(?), and those creepy trees from whichever story had the creepy trees.

Let’s say Fahrenheit 451 comes to life, which book would you become in order to save it from annihilation?
Fahrenheit 451!

What is one book you haven’t read but want to read before you die?
The Fountainhead or Atlas Shrugged. People make fun of them so much I feel like I’m missing out.