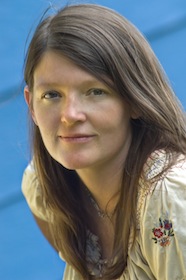 Chris Monroe is the creator of the long running newspaper comic strip “Violet Days,” and the 2004 anthology: Ultra Violet: Ten Years of Violet Days. She is also a children’s book author and illustrator. Her books include the “Monkey with a Tool Belt” series, Sneaky Sheep, and the upcoming Cookie the Walker, all from Lerner Publishing/Carolrhoda. She recently released Monkey with a Tool Belt and the Seaside Shenanigans, and illustrated the new children’s book by author Kevin Kling, Big Little Brother, from MHS/ Borealis. She lives in Duluth.

What book(s) are you currently reading?
I just finished Robert Mitchum: “Baby I Don’t Care”. He really was so damn cool.

Have you ever had a crush on a fictional character? Who?
I loved Aragorn in The Lord of the Rings when I was a preteen. It was hard coming back to reality.

If your favorite author came to Minnesota, who would it be and what bar would you take him/her to?
I would take the ghost of Richard Scarry to First Ave.

What was your first favorite book?
In the Night Kitchen by Maurice Sendak. The amazing drawing style, crazy Oliver Hardys, pancake dough, and full frontal nudity really piqued my interest.

Let’s say Fahrenheit 451 comes to life, which book would you become in order to save it from annihilation?
Monkey with a Tool Belt of course. Chico Bon Bon could build something to save all the books, put out fires, and dismantle mechanical dogs.

What is one book you haven’t read but want to read before you die?
The Tibetan Book of Living and Dying by Sogyal Rinpoche. I’ve started it several times but start to feel too mortal.