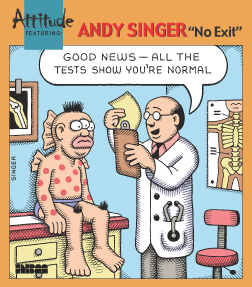 Andy Singer is a freelance cartoonist and illustrator who has been drawing and publishing cartoons for over 20 years in books, magazines, newspapers, websites, bus ads, flyers, film, TV, and just about any other medium where it’s possible to display an image. You can see some of his most recent cartoons at his website or go to Google Images and type– andy singer cartoon. (Editor’s note: Look we did it for you!)

Have you ever had a crush on a fictional character? Who?
Ex-girlfriends and random women who I imagined or desired to be something or someone they weren’t, thus rendering them “fictional.”

If your favorite author came to Minnesota, who would it be and what bar would you take him/her to?
Let’s say Bernie Kliban or Saul Steinberg actually rose from the dead, came to Minnesota and wanted to have a drink with me. I’d go to W.A. Frost– my favorite bar. It’s a nice space, a little quieter than most bars, and there’s no TV sets so we could just talk and make doodles.

What was your first favorite book?
I’m told it was Goodnight Moon.

Let’s say Fahrenheit 451 comes to life, which book would you become in order to save it from annihilation?
Energy and Equity by Ivan Illich.

What is one book you haven’t read but want to read before you die?
I’d like to read Plato’s Dialogues.