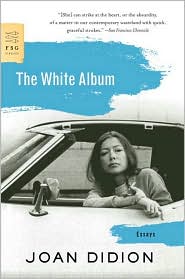 You left a self-addressed envelope, the size of a note card, in the Duluth Public Library’s copy of The White Album, a collection of essays by Joan Didion. Your name as both the sender and receiver. Both address labels indicate an association with the University of Florida. One is decorated with a UF, the other a cartoonish profile of a cartoon gator, its snout hanging out of a decorative oval. Neither label is very artistic minded, not the finest work of a graphic designer. I doubt this is your fault, that you are the graphic designer in question, though you might have selected these two designs from eight other versions and you most certainly were the one to decide they were at least good enough to stick to this envelope.

I assumed, Shevaun, that you were older. Perhaps of the same generation as Didion. That you had checked out The White Album for the same reason I might revisit the movie “Adventures in Babysitting” or Debbie Gibson’s “Shake Your Love.” A nostalgia for the late 1960s in California. The Manson era. Black Panthers. The Doors, sans Morrison, trying to record an album without the vocalist known for wearing black leather pants without underwear. I imagined you looked like Didion, whom Michiko Kakutani of The New York Times once described — using Didion’s own words from A Book of Common Prayer — as possessing “an extreme and volatile thinness. . . she was a woman. . . with a body that masqueraded as that of a young girl.” I imagined you as widowed and crafty. A woman keeping the same strict schedule for almost half a century. A woman who could write a recipe book filled with meals starring Campbell’s Cream of Mushroom Soup. A woman with things that went in certain places.

I was wrong. I Googled you. You are maybe in your mid-30s or en route. And your education is of a certain level that damn-near paralyzes me when I consider the quagmire of student loan debt you must be seeped in. My wallet weeps for you, Shevaun, and it’s weeping louder than my admiration for your commitment to furthering your education.

Did you finish The White Album? Or did the envelope mark the spot where you said: “I’m feeling you, Joan. But I just can’t, right now, give a shit about water treatment and highway systems. I was with you through the piece on the end of the 1960s. And if I’d gotten there, I might have enjoyed the one about your migraines and how you’ve learned that suffering through them is like a form of yoga.” Then the book was due and you just didn’t renew it?

Or maybe that envelope marks the point where you said: “Screw this rental. I’m buying!” I don’t remember where you parked your envelope, but if this is the case I bet it is where Didion says:

“I am a thirty-four-year-old woman with long straight hair and an old bikini bathing suit and bad nerves sitting on an island in the middle of the Pacific waiting for a tidal wave that will not come.”

That’s the sentence I read over and over again while sitting at a tall top table at Subway, unsure of why it snagged my attention. It’s an easy sentence. A descriptive sentence. The sentences around it provide perspective: her marriage is on a precipice. There have been tidal wave warnings. Literally. They are in Hawaii. Her daughter wanted to go for a swim. Maybe it’s just the idea of picturing Didion as a thirty-four-year-old when for all of my life she has been post-thirty-four. And maybe it’s because I have a fortune teller’s view of her future.

Many decades later the tidal wave will come and that tidal wave is The Year of Magical Thinking. Writing, Shevaun, is a weird thing. I’m cooking up a theory on Didion as the OG blogger.

I can give or take Joan Didion. Her curiosities aren’t necessarily mine — the essays on water treatment and the the highway system. But when she turns an eye on herself, buying a dress for Linda Kasabian, witness in the prosecution of Charles Manson or on her first book tour and ordering a Shirley Temple from room service for her daughter, I take her. I take her like the Lothario on the cover of a bodice ripper, chest like fine leather upholstery and hair like a windsock.