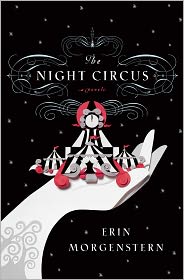 I've never been to the circus, but if it's even a tiny bit like the enchanting, magical place described in Erin Morgenstern's The Night Circus, I need to go as soon as possible. Her circus of ice gardens, wishing trees, cloud mazes, and the stunning illusionist who could transform herself into anything, was beautiful.

But the circus is actually just a backdrop of this elaborate tale of games, deceit, egos, romance, and magic. Set in the late 19th and early 20th centuries, the circus is the chess board for two magicians, Celia and Marco, bound in a game of skill since they were young. Which magician can create the most extravagant circus attraction?

The things Celia and Marco build are things dreams are made of, which is the name of the circus, Le Cirque des Reves or The Circus of Dreams. But their lives are anything but dreamy. Bound by their mentors to be competitors in a game in which they don't know their opponent and don't know how a winner will be chosen, Celia and Marco struggle with their fates.

Their mentors sealed their fates when they were young and continue to play a part in their lives, but a host of other characters also add some magic to this complex tale. A clock maker, a contortionist, a fortune teller, and twins born the day the circus began make for an intricate set of plots that all collide in the end.

Easily the best part of the book is the description of the circus; Morgenstern's artist background brings it to life. I was standing in the center of the black and white tents, smelling the caramel apples and cotton candy, transfixed by the ornate clock. I wandered through the ice garden and picked a crystal flower. I could hear the flapping of the tents, gasping of audience members, and all the bells, whistles, and chimes. It is so descriptive without being overly descriptive. It's very imaginative and original and I found myself oohing and ahhing while I read.

I really did love this book, but I was disappointed by the ending. It felt as if Morgenstern wasn't quite sure how to resolve it, so minor characters all of a sudden had something to do and it all came together, but the final resolution could've happened much sooner, so why the long wait? It just didn't seem to be as magical as the rest of the book.

But ending aside, I really did love The Night Circus. This is Morgenstern's first book and she can only get stronger the more she writes. I look forward to her bringing me into her future, magical worlds.