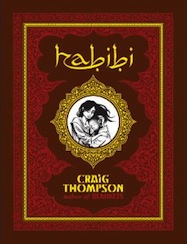 If you want to read another glowing review about the majesty and mystery of Craig Thompson’s much-awaited, much-ballyhooed new graphic novel Habibi, you should probably just skip this one.

Before I get too far in here, I want to say that this book is beautiful. The art is spectacular. The care and attention that it must have took to draw this book is mind-boggling. I will make no bones about the graphic part of this novel. It’s a masterpiece.

However, the story here? It’s a confusing muddled sort of fable-y, fairy-tale-y mishmash of WTF. After finishing Habibi I read nearly every review I could find. I was looking for some guidance, some context, maybe some explanations, because frankly I’m not entirely sure I ‘got’ this book. Of the ten or twenty reviews I read, only one in The Guardian was remotely critical.

Most of the reviewers were too busy foaming at the mouth over the beauty of the book and then addressing the story as almost an after thought. Of course, I also think a lot of those reviews are written by other artists or comicbook geeks.

I’m neither of those things, I’m a reader and I have to say I was wholly disappointed while reading Habibi. For most of the book I was confused and by the I felt mislead and manipulated.

The story here, as near as I can tell, is about the love between Dodola and Zam and the barriers they must overcome to be together. And there is a lot to overcome — slavery, prostitution, years of separation, poverty. . . think of every bad thing that could befall a person and it befalls either Dodola or Zam. I think this is supposed to be devastating, these rapes and mutilations and baby-murders and kidnappings, but when piled on the same two characters over and over again it becomes numbing. I never actually feared for the safety of Dodola or Zam when either of them were in grave danger because after the first few tragedies, I knew the worst thing short of death was going to happen to them and they’d still survive.

But even worse than the heaping helping of tragedy was the confusing way Thompson chose to tell the story. It’s all very floaty and dreamy, and I believe Dodola is the narrator here, but I’m not entirely certain that’s the case. The story starts out in a pretty linear manner – Dodola, as a child, is sold into marriage to a Scribe (I will come back to this in a minute). Though the sex stuff terrifies her, Dodola is taught to read and write and things go well until her husband is murdered and she’s taken away to become a slave.

While in the marketplace Dodola tells the traders that baby Zam is her brother so they won’t kill him, she manages to make a daring escape and absconds with the baby to the desert where she raises him. They live in an abandoned boat in the middle of that desert and Dodola uses her body to get food for them. This is where the narrative gets a little hinky. It doesn’t help the story that it’s woven throughout with fables from the Quran and tales about the Arabic writing. These fables and side stories on their own are fabulous, but trying to marry them to the story of Zam and Dodola is confusing and frustrating.

The way the story flashes forward and back and forward again doesn’t do the reader any favors either.

But here’s my real quibble, I didn’t buy the romantic relationship between Zam and Dodola. This is supposed to be a love story about people falling in love, and it just doesn’t work for me. For nine years, and granted she was a child of thirteen or so when this started, Dodola was Zam’s caregiver, his mother, and through most of the book she refers to him as her child. And I just can’t believe (mini-spoiler) that she’d fall in romantic love with him when they are eventually reunited, and Thompson gives me absolutely no reason to see how or why this happens.

As a beautiful book full of pretty pictures, Habibi is a total success but don’t get too wrapped up in the story aspect or you’ll leave just like me, totally disillusioned.