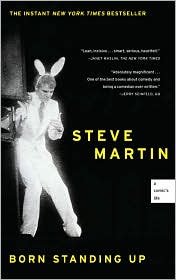 The young costumed actor at Epcot Center greeted us with a British accent. We must have been in a zone dedicated to all things charming and UK. It was the mid-1980s and my brother and I were too old to be Disney World's target audience, but my parents had decided that if we went any earlier we wouldn't remember it, we wouldn't appreciate the hundreds of dollars it costs to have the most magical experience on earth.

I don't remember either of us ever asking to go to there in the first place.

I was a few paces in front of my dad and heard him respond automatically — though not purposefully — adopting the accent of this college kid.

I doubled over like I'd been shot in the stomach. It was the first time comedy dropped me to the floor, snorting, hiccuping, gasping, and crying. “Hoi.” My dad had this look on his face, one eye squinched tighter than the other, a little embarrassed, but mostly charmed with himself. Then he, too, came apart.

My dad has always been funny. He's that spot where circumstance and corny collide. Our own personal Clark Griswold, the luckless character played by Chevy Chase in the “Vacation” movies. “Hoi.”

He told me potato chips were made from scabs and ketchup. He called my mom “Momma Mia with the Spicy Meatballs,” but only behind her back. When our windshield wipers broke on the way down the Going to the Sun Road, he fashioned a manual version out of black electrical tape, an open window, my mom's right hand and his left.

Whenever he laced up his tennis shoes, he made his feet dance around the kitchen. He couldn't stop them! He had “Happy Feet!”

Happy Feet. And that's how I learned, a week ago while reading Martin's memoir Born Standing Up that my dad pinched some of his best moves from Steve Martin. The comedian casually mentioned “Happy Feet,” and the image that came to mind was my dad’s feet. I should have known. We had a Steve Martin album, the one where he is wearing bunny ears. And I knew my dad didn't invent the exaggerated “Excuuuuuuse Me!” or his confident assertion that he was a “Wild and Crazy Guy.”

Meh, who could blame him. Old silver locks is, after all, a comic genius.

Martin's book — which he claims is more of a biography than an autobiography since the stand-up comedian version of himself hasn't existed for decades — starts with his first job. He's just a kid selling guides to Disneyland for 25 cents a pop. He has the run of the park and gets sucked into the world of magicians and corny jokers. Martin works his way up through high school gyms and poorly attended bar gigs before eventually becoming a regular guest on Johnny Carson and “Saturday Night Live” and then filling stadiums with arena rock-sized audiences.

The funniest part of the book is its lack of humor. There are occasional nuggets, but for the most part it’s a clinical look at these first few decades in Martin's career. And when the physical comedian known for sight gags does talk about his jokes, they don't necessarily translate to the page.

Born Standing Up is a dry Steve Martin 101, worth a read for fans — which I am — but it didn't get dog-eared the way his fiction does, hooted over like his role in “Dirty Rotten Scoundrels” does. None of it was as funny as the “Hoi” it inspired at Epcot Center.