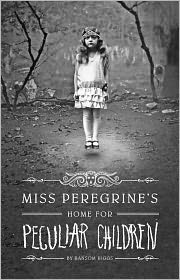 The world is just so huge, boundary-less, in young adult fiction. It’s malleable. A soft fontenelle. A kid standing at the foot of her parent’s bed and saying: When I grow up I want to be a cheerleader and a fireman and a teacher and a rock star and a robot. Maybe I’ll be the homecoming queen of Mars High School or paint highway lines on Jupiter.

This is in my head as I’m reading Mrs. Peregrine’s Home for Peculiar Children, the inventive debut novel by, best-name-ever alert, Ransom Riggs.

Jacob is a 16-year-old heir to a drugstore chain, who has mostly been enamored with the seemingly tall tales his grandfather has told him about growing up surrounded by a cast of unusual characters with science-defying traits like: can levitate, can make fire, can be invisible, has a mouth in the back of his head. In an extra-visual and creepy scene, Jacob witnesses his grandfather’s death at the hands of, what, some sort of monster? The visual sends him straight into the open arms of a therapist and later on a healing trip to an island in Wales to learn more about the facts and fictions of his grandfather’s life.

Lest you are an unbeliever: Riggs has included photographic evidence of the cast of peculiar children. These are delicious black and white circus fare he pulled from the archives of collectors and they really add to the story. (Though, as a person who likes to inspect the seams of fiction writing, I wonder which came first: The photos or the book. Did Riggs find them, organize them, then write to make them fit?)

Has YA fiction gotten better in the two-plus decades since I flipped on a flashlight at 3 a.m. and read Christopher Pike novels in a tent of sheets? I remember a lot of boys versus girls. Summer crushes. Pesky siblings. Training bra dramas. How did this blood land in my underwear? Hokey mysteries that dipped a toe into the supernatural, then sprinted back to reality. Nothing like this, though. Was it always there and I just wasn’t creative enough, broadening my scope of interests enough to find it?

All I know is that it is a good time to be a young adult reader.