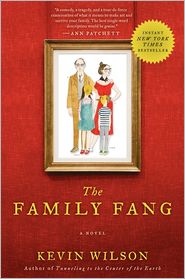 Here is a sentence that will make you run-no-sprint for your medium of choice: “Conventional lives are the perfect refuge if you are a terrible artist.” Kudos, Kevin Wilson, for this little gem buried deep in the novel The Family Fang.

The Fang Family is a cute little one-sitter of a novel about a terrifically non-conventional family of performance artists — Caleb and Camille Fang and their children Child A (Annie) and Child B (Buster) — who tend to spring their art on unsuspecting audiences at a mall near you. Things like: Mom shoplifts candy from the bulk bin, Child A narcs her out to management, Mom gets stopped at the entrance to the store then spills gallons of candy from her pocket, Child B makes a dive for it, cramming it into his mouth and inspiring other kiddies to do the same, Dad records the scene which will eventually air at a gallery.

The story finds the children as adults who have moved back home for some R&R after prickly life-capades. Annie is an actress who's semi-nudie pics land on the internet along with some chatter about her new lesbian love interest. Buster, a freelance writer with two novels under his belt, has been almost-willingly shot in the face with a potato gun while on assignment. The former heals by drinking her weight in breakfast vodka; the latter falls into a relationship with a fledgling writer.

Wilson is a funny writer. He can take sentence from Meh to Heh in a few easy keystrokes. His best moments crop up in dialogue or minute details. Annie's boyfriend, a screenwriter, has a tattoo of a typewriter surrounded by dollar signs. He wears a hat like Buster Keaton, despite hating silent movies, because he has a lot of money and ran out of things to buy. That said, the family's art projects seemed sitcom-y and didn't translate well to a page. They seemed a little zany-for-zany sake, like a seventh-grade girl wearing two different shoes to prove she is different.

When Caleb and Camille go missing, leaving just a bloodied van on the side of the road, Annie and Buster are left to consider whether this is the work of a rest-stop slayer or are they being Punk'd and this is all another one of their parents large-scale projects? The what-is-art question is circled: Starting your house on fire in a statement about materialism is art. Announcing that you are going to start your house on fire as a statement about materialism is not. When Caleb takes a digger in the grocery store and lands among broken bottles of spaghetti sauce, Buster flips at the impromptu performance. He falls to the ground and begins eating the sauce, only to find that this time it isn't a show. Easy mistake.

This novel reminded me of one I read and re-read when I was in elementary school, “Me and the Weirdos.” In it, a preteen is mortified by her mom, dad, and older sister. A trio of cheerful misfits who do things according to their own rules, completely untouched by fashions, trends or a mainstream lifestyle. Of course, the main character is repeatedly mortified by their behavior until she realizes it has its benefits.