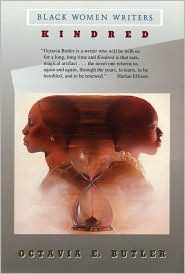 Time travel rivals zombies for popularity these days, so I had to keep reminding myself that Kindred was written in 1979. While Octavia Butler does not include traditional zombies in this historical-fiction-meets-memoir-meets-science-fiction novel, she does create haunting sense of the undead as her narrator travels between present and past.

Dana, an African-American woman, repeatedly dissolves from her present, 1973, to the early 1800s, whenever she is needed to save the life of Rufus, the white son of a plantation owner. Dana quickly realizes that Rufus could be her “several times great” grandfather, and that she has little choice but to save and protect him to secure her ancestry. She has few choices but to act as a slave, to survive, experience, and endure.

Enduring feeds one of the central conflicts in the book, as Dana wrestles with what she, free her whole life but a slave to the past, will tolerate. Though she still has more power over her situation than the contemporary slaves, she is beaten repeatedly, treated as property, and forced to watch her new friends endure much worse. She revises her values and morals as the conventions of the past force her into difficult decisions. Her 20th century sensibility and philosophy-visually symbolized through her incongruous pants-shake when confronted with 19th century reality, providing a fresh lens of social criticism and personal discovery.

Butler also offers the perspective of the dominant culture through Dana's husband. In her present, Dana is married to Kevin, a white man who accompanies her on some of her trips back in time. For me, his reaction to his position as a white man in the pre-Civil War South was one of the more captivating parts of the novel.

I don't have a high tolerance for time travel in books, and at times it was hard for me to suspend my disbelief and truly embrace the story. However, the premise of Kindred allows Butler to explore the slave narrative from a truly unique perspective. This won't go into my favorites pile, but as a thought-provoking, conventions-challenging novel, it was worth the read.