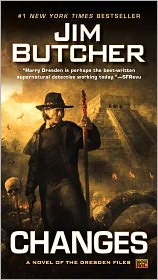 I believe Jim Butcher wrote book twelve of the Dresden Files series, Changes, for the fans of the series who have lived vicariously through every book and believed they know Harry Dresden on a personal level. The storyline was perfect. The action was heart-stopping at times. It was an emotional rollercoaster from start to finish.

And for that, I hate Jim Butcher.

Rather than calling this book Changes, he should have called it The End. Or maybe something like Peace Out, Bitches. Or better yet, Done. The word ?changes? doesn?t fit for me because Butcher basically wiped clean all the elements that make Dresden who he is and make the series what it is.

Susan is back and she has a surprise for Harry. Their daughter has been kidnapped by the Red Court and is going to be sacrificed in a ceremony that will eliminate all the wizards. Susan never told Harry about getting pregnant because she knew he?d want to take the girl and protect her. But, she also knew that if anyone ever found out that Harry had a daughter, they would hunt for her mercilessly because of that. He has too many enemies. So, Susan gave birth and then gave the girl to a family to be raised as their own. But someone close to her snitched and now they have to find her before she?s murdered.

Let?s stop there for a second. From book one we see the torment that Harry lives with because of his lack of family. Harry?s mother was a wizard that left him and his father when he was little. His only memories of his father are good ones. He was a traveling magician with a sweet disposition and a fierce love of his wife. After his father died, he was taken in by a black magician and nearly died because of it. The only real person in his life was McCoy, who took him in and raised him.

Harry has always been plagued by a deep sense of loneliness that came with having no real family or any real sense of being accepted for who he is. Even his half-brother, Thomas, eventually walks away from him for reasons never fully divulged.

Once Harry discovers he has a daughter and that he needs to find her and stop the Red Court he goes to everyone he knows ? good, bad, or otherwise ? for help. At first he hits brick walls and no one wants to help. Then suddenly. . .everyone is there. McCoy, Thomas, the Archive, Kincaid, and even Johnny Macone and more.

But, will that be enough?

Harry might have to call in favors from the darker elements of his past in order to have the power needed to save his daughter. His struggle with those darker elements has been a strong vein throughout the entire series. Part of you wants him to give in; while another part of you knows that he can?t. Every time he has to make the decision whether to accept or deny the dark power in order to save his child, you hold your breath.

This story is full circle. Butcher ties the series up in a perfect package with this novel. Truly the best book of the series.

Writing this review a full year after having read this book, I can tell you honestly that it is an emotional punch in the stomach for a Dresden Fan. I cried throughout the entire book ? happy tears, sad tears, angry tears. I was so shocked and angry at the end of the story that I considered writing an email to Jim Butcher and giving him a piece of my mind. This book has haunted me for a year. Even now, as I write this review, I can?t help but get emotional. It feels like an old wound is being re-opened as I think back on the book.

Yes, I know I take my series and their characters seriously. But, this is one of those books where you have a deep connection to the main character and it is written so well that you really don?t know what is going to happen until the last few pages. It could have gone either way. This isn?t one of those pansy-ass books where the author throws a major crisis at the hero and he finds a romantic way out of it. There is no easy way out and you know that from the beginning.

The question is, just how far will Butcher take it?

Editor’s note: Here there be Spoilers, don’t read on if you don’t want to know!

Don?t let that stop you from reading this book. The writing is brilliant (minus a truly awful sex scene ? no romance novels for you, JB). Any fan of Harry Dresden will resonate strongly with this novel. If you?re anything like me, you?ll need a full day and a box of Kleenex to get through it.

As my son reminded me when I?d finished it and was sobbing into my pillow. . . ?Geesh. It?s just a book.?