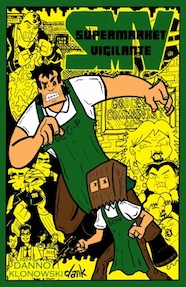 Today we have Danno Klonowski, who does stuff by day, is a cartoonist when he’s not doing that, and hosts the Lutefisk Sushi Podcast where he interviews MN cartoonists somewhere in-between those activities. Danno has written and/or drawn such titles as: Manly Tales of Cowardice, Supermarket Vigilante, Continuity Guy, Tommy Chicago, and False Witness: The Michele Bachmann Story. Danno is a co-founder of the International Cartoonist Conspiracy, part of the quorum that puts on the comic art shows at the Altered Esthetics Gallery, and lives in lovely Northeast Minneapolis with cats, dogs, and other life-forms.

What book(s) are you currently reading?
I went on a tear over the summer reading biographies (Jimmy Carter, Charles Schulz, Simon Pegg, Joe Simon) and history books of both factual information (a history of Death Valley) and fact-based fiction (The Cigar Maker by Mark McGinty). Since I started doing the Lutefisk Sushi Podcast though all my reading time has been devoted to the works of the cartoonists I’m going to be talking to.

Have you ever had a crush on a fictional character? Who?
None that jump out at me. The closest I’ve probably ever come was Claire from Generation X. I read it when I was 16, and she and Janeane Garofalo pretty much cemented my then-til-late-20s idea for what a mate and my lifestyle should be.

If your favorite author came to Minnesota, who would it be and what bar would you take him/her to?
It would be Kurt Vonnegut. I guess I’d feel the need to take him to Donnie Dirk’s Zombie Den since he’d be the walking dead and all, but we’d probably just go to Grumpys NE since that’s where I’m most comfortable. Or Psycho Suzis if its a nice day to be on the river. Why is the bar question harder than the author one?

What was your first favorite book?
Cars and Trucks and Things That Go by Richard Scarry.

Let’s say Fahrenheit 451 comes to life, which book would you become in order to save it from annihilation?
Breakfast of Champions by Kurt Vonnegut. I’ve always thought it would be the book I give to aliens to say, “So. . . that’s us.”

What is one book you haven’t read but want to read before you die?
I don’t if I want to read it so much, but I bought Dostoevsky’s Notes from the Underground to line my bookshelf when I was 22 and have yet to crack it. I just want to be done with pretension of having such thing around the house that has only existed to collect dust and be moved from place to place.