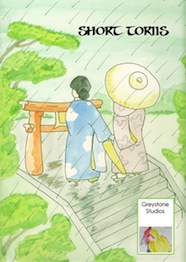 Chandra Reyer is the owner of Greystone Studios which produces printed mini comics, web comics, and Chinese brush paintings. She started making web comics in 2004, but has painted since graduating from University of Minnesota. She lives in Saint Paul with her husband, daughter, and two evil genius American Eskimo Dogs.

What book(s) are you currently reading?
Raptor Red by Robert T. Bakker and A Murder Is Announced by Agatha Christie.

Have you ever had a crush on a fictional character? Who?
It was second grade, so I’m pleading the Fifth on this one. (Peter Pevensie)

If your favorite author came to Minnesota, who would it be and what bar would you take him/her to?
That would be J.R. R. Tolkien and bars would be the least of my worries since we’d obviously be in the middle of a zombie apocalypse.

What was your first favorite book?
I had two that I re-read often as a child: The Lion, the Witch and the Wardrobe by CS Lewis and The 101 Dalmatians by Dodie Smith.

Let’s say Fahrenheit 451 comes to life, which book would you become in order to save it from annihilation?
The Lord of the Rings.

What is one book you haven’t read but want to read before you die?
Right now my goal is to read all of Agatha Christie’s 80 books. I’ve been saving Murder on the Orient Express for last since that one is so prevalent and I’ve seen the movie, but I’m betting the book is better.