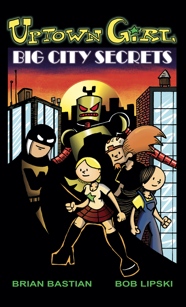 Bob Lipski started drawing comics 10 years ago and is best known for the comic book series ‘Uptown Girl’. The newest Uptown Girl book, titled Big City Secrets was released earlier this year, and Little Adventures is scheduled for spring 2012. He lives in White Bear Lake with his wife and two children.

What book(s) are you currently reading?
Bone by Jeff Smith. It’s my go-to book when I am not sure what to read next.

Have you ever had a crush on a fictional character? Who?
Wonder Woman from “Super Friends.” That counts, right?

If your favorite author came to Minnesota, who would it be and what bar would you take him/her to?
I think it’d be fun to sit down with Michael Chabon and find out more about the research he did for The Amazing Adventures of Kavalier & Clay.

Let’s say Fahrenheit 451 comes to life, which book would you become in order to save it from annihilation?
Maus by Art Spiegelman not only for the story itself, but to show exactly what comics are capable of.

What is one book you haven’t read but want to read before you die?
Jonathan Strange & Mr Norrell, by British writer Susanna Clarke. I bought it years ago and is still sitting on my bookshelf.