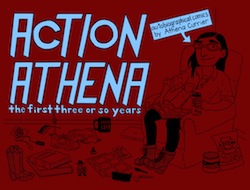 Athena Currier grew up in Northfield, MN, the town where Jesse James could not rob the bank. She is a graduate of Hampshire College. Her senior thesis project at Hampshire was “Burn Book,” a comics magazine which devoted each issue to analyzing and dissecting a different stereotype label (Slut, Hick, Hipster, and Geek). Athena’s webcomic, Action Athena, has been updating three days a week since March 2008. In 2010, it was nominated for a Lulu Award in the category of “Best New Talent.” Athena has recently collected the entirety of Action Athena into a 340-page book. Her work has appeared in numerous publications including Broken Pencil Magazine, The Daily Cross Hatch, City Pages, and The Sketchbook Project.

What book(s) are you currently reading?
Born to Run: A Hidden Tribe, Superathletes, and the Greatest Race the World Has Never Seen by Christopher McDougall; Criminal by Ed Brubaker and Sean Phillips; and I just finished Craig Thompson’s Habibi.

Have you ever had a crush on a fictional character? Who?
Yes. Agent Dale Cooper from “Twin Peaks.”

If your favorite author came to Minnesota, who would it be and what bar would you take him/her to?
If Jaime Hernandez of “Love and Rockets” fame came to town I would take him to the Triple Rock, in hopes of coming across as cool/punk enough to hang out with him. But I’m sure I would come across as the uptight dork that I am.

What was your first favorite book?
In high school, I really, really loved Siri Hustvedt’s What I Loved. She has these fantastic descriptions of the main characters’ books and art installations, and includes interesting facts about the topics they’re researching. I’ve read this book three times now, and I’m sure I will read it again eventually. It’s great.

Let’s say Fahrenheit 451 comes to life, which book would you become in order to save it from annihilation?
One Hundred Years of Solitude.

What is one book you haven’t read but want to read before you die?
Oh, gosh. “The Classics,” I suppose. But I’ll probably keep wasting my time with comic books and genre fiction instead!