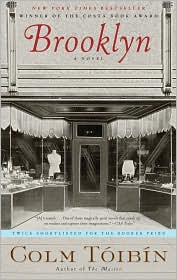 The end of August my boyfriend and I were in New York City, waiting for Hurricane Irene to blink. We spent two of our five day vacation trying to figure out if we should wait out the storm, potentially arm-wrestling the natives for bottled water and pork rind rations, or cut it short and ditch back to the safety of our hurricane-free lives in Duluth.

We left, but not before I played a version of ‘Super Market Sweep’ through Park Slope bookstores. Towering over a table of Brooklyn-specific authors on a table and deciding that if I couldn’t physically stay here I could at least read about this place we hadn’t had a chance to explore. Our flight was leaving on what had been earmarked as ‘Coney Island Day.’

Without this desire to learn more about Brooklyn, I’d have never bought Brooklyn‘by Colm Toibin. In fact, I’d picked it up tens of times, enticed by the cover and the chatter, then turned off by the description of a young Irish girl traveling to America during one of my least-favorite decades — the 1950s. Bah-oh-oh-ring.

I’m not going to pretend I loved the book. It was mostly just a pause between reading this and that. But it did give me a good lay of the land, interested me once or twice with anecdotes about the immigrant experience, and eventually riled me into a froth that made me race through the final pages to decide whether I wanted to kick Toibin in the face for the actions of his protagonist Eilis Lacey. The answer to that question would be a spoiler.

Eilis is living in Ireland with her widowed mom and her sassafras sister Rose, a working girl and a golfer who, incidentally, would make a much more interesting lead character. Eilis has big plans to stay in her hometown forever. Same streets, same friends, she’s studying bookkeeping and will eventually find a job. Rose has other plans for her younger sister: A one-way ticket to a America, with the help of a visiting priest.

She’s got a room at a boarding house run by a prickly Irish landlady. She’s got a job as a shop girl at a store on Fulton Street. And when she is overwhelmed by homesickness, the priest pulls strings to get her into college courses to keep her busy.

Eilis meets Tony, an Italian native of Brooklyn, puppy-dog enthusiasm and a love for the Dodgers. He woos her hardcore and she has just started to get comfortable with his declarations of love when she receives bad news from home. She returns to Ireland, where forces have united to keep her.

Eilis is beloved by the people who get to know her. Her landlady says she is the only girl in the boarding house who isn’t a bitch and rewards her with the best room in the house. The priest takes a keen interest in her life and scopes out Tony so he can report his findings back to Rose. She is immediately swept up by Tony’s family, a handful of brothers and his parents who share a one-bedroom apartment but have big plans to turn a plot of land in Long Island into their playground. But for the reader, Eilis comes across as humorless, fun-sucked and not fully formed. When she’s granted the best bedroom she is suspicious of her landlady, rather than grateful. She struggles to make friends until Tony enters the picture and it’s hard to see what could possibly attract him to her.

There are fun parts: Eilis getting seasick when she’s crossing the ocean, using a stray bucket as her toilet then barfing all over the boat. Eilis at a family dinner at Tony’s place, eating Italian food for the first time and marveling at how these flavors were made. Eilis losing her virginity in a super scandalous way.

Story-wise this one gets a ‘Meh.’ At one point Toibin describes the air as feeling like toast. That might be my favorite part. But it was fun picturing the streets I’d caught only a glimpse of and reading about Coney Island, which I’ve still never seen because of that bitch Irene.