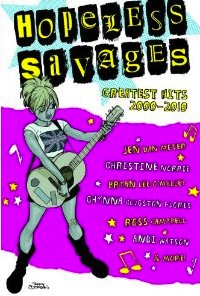 Now there is competition for my heart. Before, Ramona Flowers was the queen of all graphic novel heroines as far as my heart was concerned. Nobody came close to Ramona. Not the ass-kicking used-to-be fairy tale princesses in “Fables.” Not the real-life women who pepper so many of the graphic memoirs I love (think Alison Bechdel, Marjane Satrapi, Ariel Schrag). Nope, my heart belonged firmly to Ramona.

But then Skank Zero Hopeless-Savage kicked down the door to my heart and I fell madly in love with the made-up word using, punk band fronting, youngest member of the Hopeless-Savage family. I’m pretty enamored with the whole damn family, but that Zero is a charmer.

The fact that it’s taken me until now, a good three or four years into my graphic novel reading career, to discover Hopeless Savages Greatest Hits drives me bonkers. Not only is it written by a woman, Jen Van Meter, but it totally kicks ass. It’s smart and funny and progressive and there’s music. So much goodness. Where to begin?

Dirk Hopeless and Nikki Savage were punk rock superstars — touring with The Clash, fights, arrests, time in rehab — the real deal, but one day they chuck it all and decide to raise their family in the ‘burbs. But this ain’t your stereotypical suburban family. Nah, Dirk and Nikki, along with their children Rat, Arsenal, Twitch, and Zero are still stirring up shit and living the punk ethos.

The Greatest Hits opens with a book where the parents have been kidnapped and the kids have to save them. But before they can do that, Arsenal, Twitch, and Zero have to save their eldest brother, Rat from his decision to eschew the punk-lifestyle he was raised in and become a marketing guru for a Starbucksesque coffee corp.

While the kids are on the quest we learn a lot about how they were raised and their parents’ musical history.

It is awesome. But as awesome as the first book is, it’s Book Two: Ground Zero (The Greatest Hits gathers the three Hopeless Savages books plus bonus extras between two covers), that seals Zero’s spot in my heart.

Book Two is all about Zero and how she fell in love with MIT-bound genius Ginger Kincaid, “the hooskiest, smartest guy ever.” But things aren’t going well for Zero. There’s the big Homecoming dance where her band, The Dusted Bunnies, are supposed to play; at home she’s butting heads with her Mom who constantly grounds her, and then there’s assholes from ART (Antique Rock Television) lurking about and interviewing the family for a sort of “Behind the Music” meets where are they now special to air on the channel.

The teen-angst, the adult-hypocrisy (and having to come to terms with your hypocrisy), and the closeness of the family is on display here, and it’s a joy to read. The story is fabulous, and it’s helped along by the art of Bryan Lee O’Malley who penned the Scott Pilgrim series (home of my beloved Ramona Flowers). Book Two is the kind of good that can only adequately be shared by sputtering words like awesome and fun and tender and genuine while frothing at the mouth.

After the sheer delight of Book Two, Book Three: Too Much Hopeless Savages was a bit of a let down. This book focused on martial-arts asskicker Arsenal, and a big rematch she was having in Hong Kong with a dude who kicked her ass in high school. Now, generally I dug Arsenal as a character, and she’s good here too, but the espionage-y story didn’t do much for me. The art wasn’t helping things along either. I had a hard time distinguishing Henry Shi (Twitch’s boyfriend) from Twitch (the Mod son of the Hopeless Savage troupe) from Claude Shi (Henry’s brother and Arsenal’s boyfriend), they all looked too much alike. However, when the story veered away from all the espionage, I was right on board. And even this tiny dud did nothing to squelch my exuberance for this collection.

If you ever loved punk rock or Scott Pilgrim, you will adore Hopeless Savages Greatest Hits as much as I did. Really, it’s so damn good.