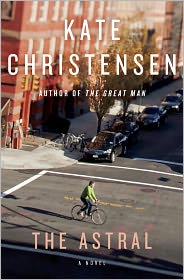 A few weeks ago I was having a discussion with Christa where I posited that big New York Publishers like books about New York where characters just wander around in their New Yorkness being all New Yorky with the utmost New Yorkitude. My prime example: Netherland by Joseph O’Neill which tons of people loved the crap of, but I would lay wagers on the fact that at least 3/4 of that tonnage was made up of New Yorkers.

Kate Christensen’s The Astral is another example I can add to my Crackpot Theory. In this novel, fiftysomething poet Harry Quirk wanders around Brooklyn being Brooklyn-y and pining for his estranged wife, Luz. She’s kicked him out of their apartment at The Astral because she’s convinced he’s having an affair with his longtime BFF, Marion, who’s been recently widowed.

Harry is outraged at the accusation and that in the process of tossing him out on his ass, Luz destroyed his latest book of poetry. So now Harry’s left to mope around Brooklyn remembering the past, whining about how totally unreasonable Luz is, hanging out with his awesome freegan daughter, Karina, and occasionally worrying about his son Hector, who has joined a strange cult that has decided he’s the messiah.

This book is a total snooze, because nothing happens. Nothing. Harry is in the same spot emotionally at the end of the book as he was at the beginning of the book. There’s no journey, there’s no urgency, no tension, no plot, no fun, no reason to keep turning pages. Seriously. Snooze.

There was plot potential, what with trying to break Hector out of the cult and the whole will Harry and Luz’s marriage survive, but you figure out early on that Harry doesn’t deserve Luz. In one early scene, Harry catches Luz on her way to work and starts walking with her. He immediately launches into some sort of monologue about their marriage and why it should continue or why he’s not guilty of sleeping with Marion or something and it takes him a block and a half to realize that Luz has stopped walking with him.

Yeah, that’s the kind of clueless jerk Harry is. Bah!

Harry is one of the more unlikable narrators I’ve encountered in a long time. He’s narcissistic, oblivious, sexist, and selfish — not exactly the kind of guy you root for or want to spend three-hundred pages with.

Because we spend all the time with the sad sack, it’s hard to find too much to like in The Astral, but there are a few redeeming bits. There’s a scene where Harry bumps into another poet friend at a cheesy bar and they play this weird word game where they try to one-up each other with ridiculous synonyms for a word. It’s cute and clever.

Plus, there’s Harry’s daughter Karina. She’s a freegan-writer-activist who was probably the most interesting character in the book but we never really got to hang out with her too much, which is a shame because she could have brought something interesting to the table.