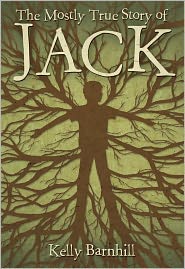 I don?t know what is with these authors making me cry lately, but add Kelly Barnhill to the list. At the end of The Mostly True Story of Jack tears were streaming down my cheeks as I bemoaned the unfairness of life.

Jack is the sympathetic hero in Barnhill?s tale. He?s a young, invisible boy, or at least invisible is how he feels. All his life his parents and brother have ignored him, even leaving him out of family portraits. Kids in his class ignore him, too, as well as the teachers. It?s almost like he is invisible.

Jack?s invisibility is heartbreaking, though he has learned to live with it, but when he has to spend the summer with his aunt and uncle, he becomes the center of attention. People stare at him, take an interest in him, and he starts to make friends for the first time in his life. All of this attention is new to Jack, but there is a reason people are so intrigued by him and the mystery of it drives this tale.

The Mostly True Story of Jack is a mixture of mystery and fantasy, but it?s also more than that. This is a novel about loneliness, the importance of family, the closeness of friends, the difference between right and wrong, and the sad fact that choosing the right path isn?t always the easiest or most fulfilling.

Just typing that last sentence makes me sad all over again as I think about the end of the book. It?s similar to feelings I get at the end of Of Mice and Men. Every time I read that I want George to not do it, to just set the gun down and go build a ranch with Lenny. George makes a hard, good decision, even though it doesn?t feel good. At the end of The Mostly True Story of Jack, Jack has a hard decision to make and I found myself so profoundly sad for him. Life is not fair. We can?t always have everything we want or need, and even though I know this, I just wanted it all for Jack.

I didn?t describe very much of this novel, but it?s really because I don?t want to give too much away. Just know that Jack finally feels visible with the family and friends he meets, that there is more to his life than its humble beginnings, and that he gives up a lot for those he loves. It really is a beautiful tale, a great lesson on tough choices, and it left me just as heartbroken in the end as I felt in the beginning.