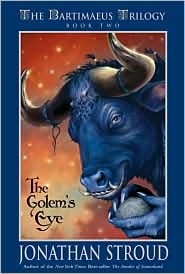 I loved the first book in Jonathan Stroud?s Bartimaeus trilogy, mostly because of snarky, clever Bartimaeus. In this second book, The Golem’s Eye, we don?t see Bartimaeus as much, and because of this I didn?t think the book was as funny, clever, or exciting as the first.

In The Golem’s Eye, we revisit Nathaniel and Bartimaeus three years in the future. Nathanial is still a magician’s apprentice, but his magic is growing, and because of his help years earlier in saving many powerful magicians’ lives, he is quickly rising in the magician government that rules England. When a problem arises with the resistance, a band of commoners rising up against the magicians, Nathanial needs the power of djinni Bartimaeus and he summons him yet again.

Bartimaeus is not happy to be summoned, particularly because Nathanial promised to never summon him again. His displeasure makes him even more sarcastic towards Nathanial and the magicians in his presence, but powerless to the magician’s summons, Bartimaeus must help Nathaniel in his quest to bring the resistance down.

Besides hearing the tale from the perspectives of Nathaniel and Bartimaeus, in The Golem?s Eye we also hear a third voice from Kitty, a member of the resistance. Kitty?s story fills most of the book, and this is where we hear the downside of the magician’s rule. In the first book the magicians seem fascinating and powerful, but we didn?t know much about how these powerful magicians treated the non-magicians, the commoners. In The Golem?s Eye the image of magicians is shattered through Kitty?s tale.

From Kitty?s perspective, we see the magicians and how they rule government, the courts, the money, and even where everyone shops. If one magician has a bad experience with a commoner shop owner, all magicians stop shopping in that store. It?s like high school cliques on crack.

I did enjoy this book for its political games, magic, and adventure, but it just wasn?t as exciting as the first book in the trilogy. I like Kitty and the resistance, I was Team Resistance all the way, but I think the lack of Bartimaeus is the real downfall here. He carried the first book and I wanted to hear from him more in this second one. I hope he plays a more prominent role in the third.