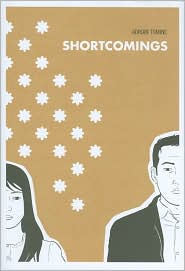 Belated gracias to NY Magazine, who in 2007 did a Q&A with artist Adrian Tomine, who in turn answered exactly what I was wondering when I finished his graphic novel Shortcomings. Namely:
Here I am reading a portrait of a cranky 30-something cuss, argumentative and flawed in ways that would take detangling spray to begin sorting through. So why am I loving this story instead of drawing images of my middle finger all over his face?

“If I tried to depict (Ben Tanaka) in a shorter piece, it could be a quick and shallow glimpse of a jerk, or I could do some lame O. Henry twist and show him cuddling a kitten at the very end. I tend to cut people slack in ways that other people might not. If someone is a great artist or a really funny guy or really insightful in some way, it won’t bother me if they’re also an asshole,’ Tomine said in the interview.

Ben is your friend’s insufferable boyfriend. The one who won’t clap at the Asian-American film festival his Japanese girlfriend organized because the finale was a hokey story about working in a fortune cookie factory and he should know: He’s the manager of a local movie theater — or as he says ‘In the industry’ — and obviously can separate the shit from the shinola.

Instead of hitting up the post-festival decompression party at the bar, she rides home with the ranter who disses the entire operation. It’s the classic sketch of the death of a relationship. Miko standing in the doorway of the living room dressed in just her undies, asking Ben if he wants to come to bed — wink wink — while he studies the back of another film he got in the mail. It makes you crave a preface where it explains what these two ever had in common.

Ben has a foil: his bestie Alice is a lesbian, so nutso about the freshwomyn where she is doing post-grad studies that she can barely get through her classes. Instead of getting frustrated at Ben’s lack of self-awareness, she calls him on it. And she agrees with Miko’s assessment that Ben is obsessed with media’s depiction of the ideal woman: white, blonde. He denies it, muttering something about how you don’t fantasize about sand when you’re in the desert, but that doesn’t mean he doesn’t get hot pants for a newbie at his theater, a young 20-something named Autumn. Young and blonde, of course. A self-described exhibitionist and performance artist who photographs her middle-of-the-night urination. At this, he’ll clap.

When Miko leaves for an internship in New York City — their relationship set in pause mode — he immediately calls the little minx.

Adoring this story is a testament to Tomine’s ability as both a writer and an artist. Although it’s just a short little book, these characters are complete enough to like and loathe. They are as recognizable as pieces of your own posse or sections of your own dream journal: charming, but naive; funny and smart, with quick trigger suspect impulses. The art holds up its half of the storytelling bargain — perhaps more than half. The images lend to the general vibe, add a comedic element or express an underlying truth that maybe Ben doesn’t even get.

Tomine is some sort of Tetris master with everything he packs into this short piece of work.