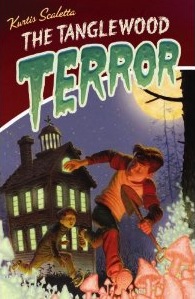 What I like so much about reading Kurtis Scaletta’s novels for middle-grade readers is that he manages to make me feel both young and old at the same time, and not old in the woe-is-me way but in the wow I’m a responsible grown up way.

In The Tanglewood Terror strange, glowing mushrooms have started to grow in the woods behind Eric Parrish’s house. At first Eric kind of brushes off the phenomenon. He’s got other things on his mind, the big championship football game; his distracted, on the brink of divorce parents; a little brother he doesn’t quite get; and Cassie, the neighbor pig he’s responsible for taking care of.

But the mushrooms refused to be ignored. They’re aggressive, quick-growing, and hard to kill. Plus, THEY GLOW! Yes, that deserves to be in all caps. Glowing mushrooms. How creepy is that? And make no mistake, the mushrooms are creepy. They creep out of the woods and under the floors and start growing from the walls and cupboards in Eric’s house. They take over the football feed and threaten the entire town For fungiphobics like me, it sounds like a nightmare.

As much as Eric would like to spend all his time figuring out what the deal is with the glowing, humungous fungus, he’s got to deal with his life too. His little brother’s pissed because Eric often pushes him around. Eric’s a big kid and a good football player and sometimes he doesn’t know his own strength both physically and emotionally.

This really comes into play when he gets into a fight with two of his football buddies who are bullying Cassie, the pig. It’s really very sweet when Eric rushes to Cassie’s defense, even though the repercussions of what happen are quite big.

But even with everything going on in his life, the mushrooms eventually command all Eric’s attention. Especially after he befriends Mandy, a runaway from the local girl’s school where his mom works. Mandy’s busted out of the joint to investigate the glowing mushrooms.

Once Eric and Mandy team up the action really gets kicking and the rest of the book rushes by at a breathless pace that’s a lot of fun to read. I don’t read a lot of mysteries, so I forget how engrossing they can be. The Tanglewood Terror is that kind of mystery. What’s the deal with the mushrooms? What’s the deal with Keatston, the town that was destroyed nearly 200 years ago? And can they save Tanglewood from being swallowed up by the glowing fungus?

As if that weren’t enough, there’s a kind of creepy old lady who lives in the woods, a mysterious science fiction writer, and a music festival that goes horribly awry.

The book is so much fun. It gave me the same kind of multiple personality disorder I got when reading Mamba Point. At one point in The Tanglewood Terror Eric and his little brother sneak out of the house and as I was reading I audibly gasped and said out loud, “You naughty kids.” The grown up in me was aghast that they’d do something like that, but the reader in me was glad they did because kids that stay in the house aren’t that fun to read about.

Finally, my favorite part of the book was one single sentence. Which is probably weird to say, but I’ll explain it a bit. It was just four simple words but those words were so unexpected and did so much to up the tension and danger in the book that I couldn’t help but cheer that sentence. I won’t tell you what that sentence was because I don’t want to ruin it for someone else who might have the same reaction.