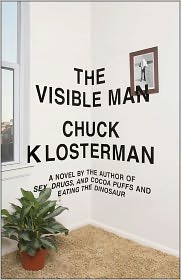 It’s obvious where Chuck Klosterman came up with the premise for his novel The Visible Man. Old Red Beard’s 2009 book of essays Eating the Dinosaur includes a chapter about watching through the window a twentysomething woman who lived in an efficiency apartment similar to his own in Fargo. Making dinner, working out on a NordicTrack, cooking an elaborate dinner, and then fighting with her boyfriend.

Did she watch him, too? He suspects she did. Maybe even watched him barf one night. Or maybe that was a dream.

‘For two years I watched a revolving door of nonevents that never stopped intriguing me,’ he wrote.

Thus the invention of the character with the alias Y__. Victoria Vick is a therapist who has begun sessions with Y__, who reveals that he was involved with a government project that resulted in the creation of a series of sprays and creams that make it possible, through light refraction, to travel through the world unseen. He’s not invisible, per se. He’s just deeply camouflaged.

Y__ takes advantage of this invention — a project that was abandoned by his fellow creators and forgotten by the government — to slip into people’s homes and observe them. He is fueled by the belief that you can never really know someone unless you see them when they are alone. That their public self is merely an adaptation that shifts depending upon who they are with.

Y__ doesn’t necessarily want a therapist. He wants to unburden himself of a secret. The nights spent silently watching a woman go for a run, come home and go nuts on a bong, binge and run some more. Eventually he feels he has to intervene. He believes that if he throws off this cycle, she will find some relief from her addictions. He eventually intervenes with bad results.

Then Victoria becomes a little too interested in Y__ and his unique lot.

The novel is played as a series of meetings with Y__ that have been compiled for publication. It includes summations of sessions and emails that she wrote to herself afterward, the standard note-taking of professionals who have to record inane details about your life so that the next time you get a cavity filled you can resume a conversation about pets and vacations.

The Visible Man suits Klosterman’s strengths as a writer, debater, and pop culture expert in a way that his debut novel Downtown Owl did not. His forte is the hypothetical scenario that includes a wild card element — then giving it fan fiction treatment. With Downtown Owl, the wild card was merely a looming storm. The end result was Klosterman squeezing himself into some sort of mold of what a novel should look, feel, and sound like. It was better than okay, but it felt like Klosterman wearing Jon Hassler’s face paint.

Chuck Klosterman has a very distinct and powerful voice. Like, if you spent too long with him or read his entire canon, you would be in danger of catching it. This is a pro when it comes to his essays; a detriment to his work as a novelist. The three main characters in Downtown Owl sounded like incarnations of the same person, all saddled with the burden of a Klostermanian accent. Almost all of The Visible Man‘is the in the words of Y__. So when he leans Klostermanian, it works because he isn’t pitted against another version of himself. (Adversely, with the character Victoria Vick, Klosterman seems to have over-corrected and written a woman who is pretty dim and seems like an unlikely candidate for a career in therapy).

Klosterman still makes a better essayist than a fiction writer, but with The Visible Man he gets pretty damn close. This is a super fun read that leaves you watching yourself a little more closely in those alone moments, wondering ‘What would Y__ see?’