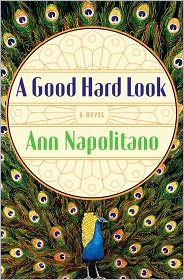 It’s probably a good idea to bone up on the life and times of Flannery O’Connor before you dive into Ann Napolitano’s latest novel, A Good Hard Look. As a fan of O’Connor’s work, but pretty clueless about her life, I struggled with the timing and pace of this novel set in the last few years of the great Southern writer’s life.

While I was well aware that Flannery died young of Lupus, I couldn’t remember if it was in the 50s or 60s. Since I’m an ardent believer that one shouldn’t have Google at the ready when reading a book, and that the author should provide all the information needed, I really struggled to get my feet under me in this one.

The book opens with soon-to-be-weds Cookie and Melvin on the night before their wedding. They’re woken in the middle of the night by the horrendous hollering and bellowing of Flannery’s peacocks. The noise is so disturbing it knocks Cookie right of bed where she lands, face first, on her nightstand blackening her eye. As Melvin tries to comfort her, they engage in some pretty violent premarital sex.

Cookie appears the next morning a beautiful bride with a black eye that causes the citizens of Milledgeville, Georgia to twitter about nervously wondering if there’s something they should be worried about, but all that is quickly forgotten when their most infamous resident, writer Flannery O’Connor appears at the reception. Considering she has a black eye and people are thinking her new husband beats her, Cookie is much more dismayed at Flannery’s appearance. She’s not a fan of the woman or her writing, and Cookie makes that abundantly clear throughout the novel.

Unfortunately, Cookie’s new husband is kind of digging Flannery. He digs her so much that he begins sneaking away from work to visit Andalusia, Flannery and her mother’s farm, where he gives Flannery weekly (and sometimes more often) driving lessons. This is all done on the sly because both Melvin and Flannery know Cookie would be none too pleased with their burgeoning friendship.

But Cookie’s too busy to notice. Besides getting pregnant right away, she’s the head of every club in town and is really working her way up the social ladder, trying to position Melvin as the next mayor of Milledgeville. Plus, she’s hired Lona Walker, local seamstress and secret stoner, to make curtains for every room in the house. Lona is the sad sack wife of a police office who could put Cookie’s social climbing to shame. Lona reluctantly takes on an assistant, young Joe Treadle a classmate of her daughter Gigi’s and son of Miss Mary, town busy body. It doesn’t take Lona long to get busy with the busy body’s son, and then all hell breaks loose.

After one tragic afternoon, nobody’s life is ever the same. The second half of the book follows each of the characters as they try to put their lives back together. Yeah, it felt a little coincidental and predictable to me too.

I really struggled with this novel. The timeline is never made clear. Not just where we are in time (from what I gather the book opens in 1962), but the actual timing of events. Weeks and months fly by, but it’s never quite certain. One minute we’re at a funeral and the next one of the main characters is absconding to New York. I really have no idea how much time passes between some of the more significant events depicted in the book. Is it weeks or months? It’s hard to gauge the seriousness of some things because I can’t tell if characters are overreacting or if something has been an ongoing problem over a period of months.

A lot of the tension here hinges on Cookie?s dislike of Flannery. I think it?s supposed to make Melvin?s betrayal even deeper, but when we find out what has caused the animosity, it?s disappointing ? kind of eye-rollingly so.

But the book is not without charm. The scenes between Melvin and Flannery driving through the country are great. Melvin is a great character, and every time the narrative spent time with him it was bliss. He was the most fleshed out character, the one with real internal conflicts and things at stake. I only wished we?d have spent more time with him rather than Cookie who doesn?t have any redeeming qualities and Lona who only served to muddy up the story.